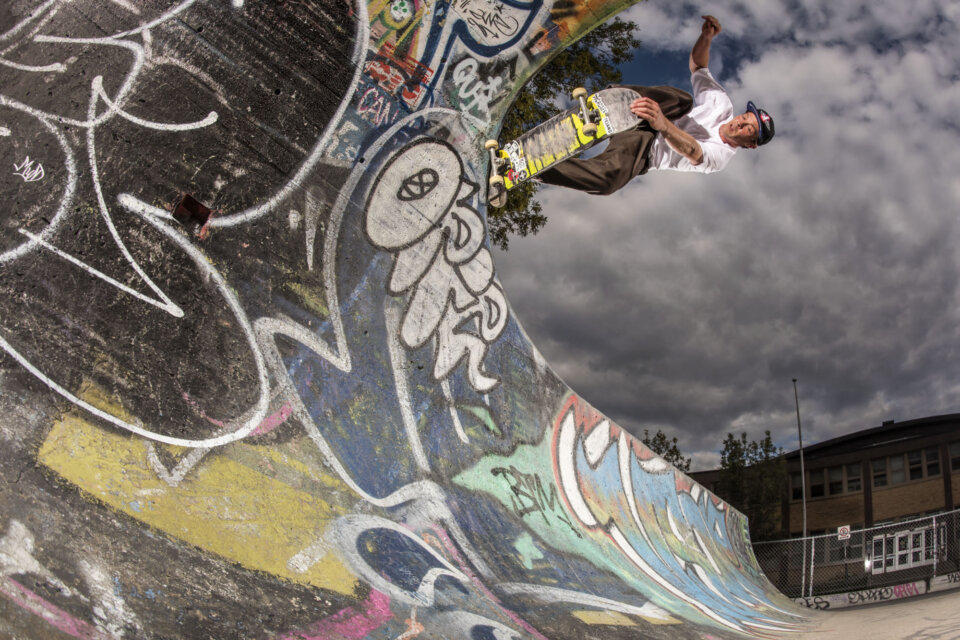 The Big-O Pipe in Montreal is what many call Canada’s most infamous skate spot. The Pipe is to Canadian skateboarding what San Francisco’s Embarcadero was to US skateboarding, and, interestingly, both sites were constructed without any expectations that they would attract skateboarders—they were just aesthetically pleasing architectural design elements.

The Pipe, for example, was created as an entrance tunnel to the 1976 Montreal Olympic secondary track and field stadium. If you look at The Pipe in skateboard photos, it’s an interesting structure—a flattened fullpipe—but if you zoom out, The Pipe takes on a completely different form: it is a large concrete whistle. Just like the whistles you played with as a child, it has a flattened top and bottom, the halfpipe section is the mouthpiece, and, the opening in the roof (what we call “the window”) is where the ball would be locked into place. Such a simple object, yet when blown up to that size in concrete, its difficult for many to see that it’s a whistle. 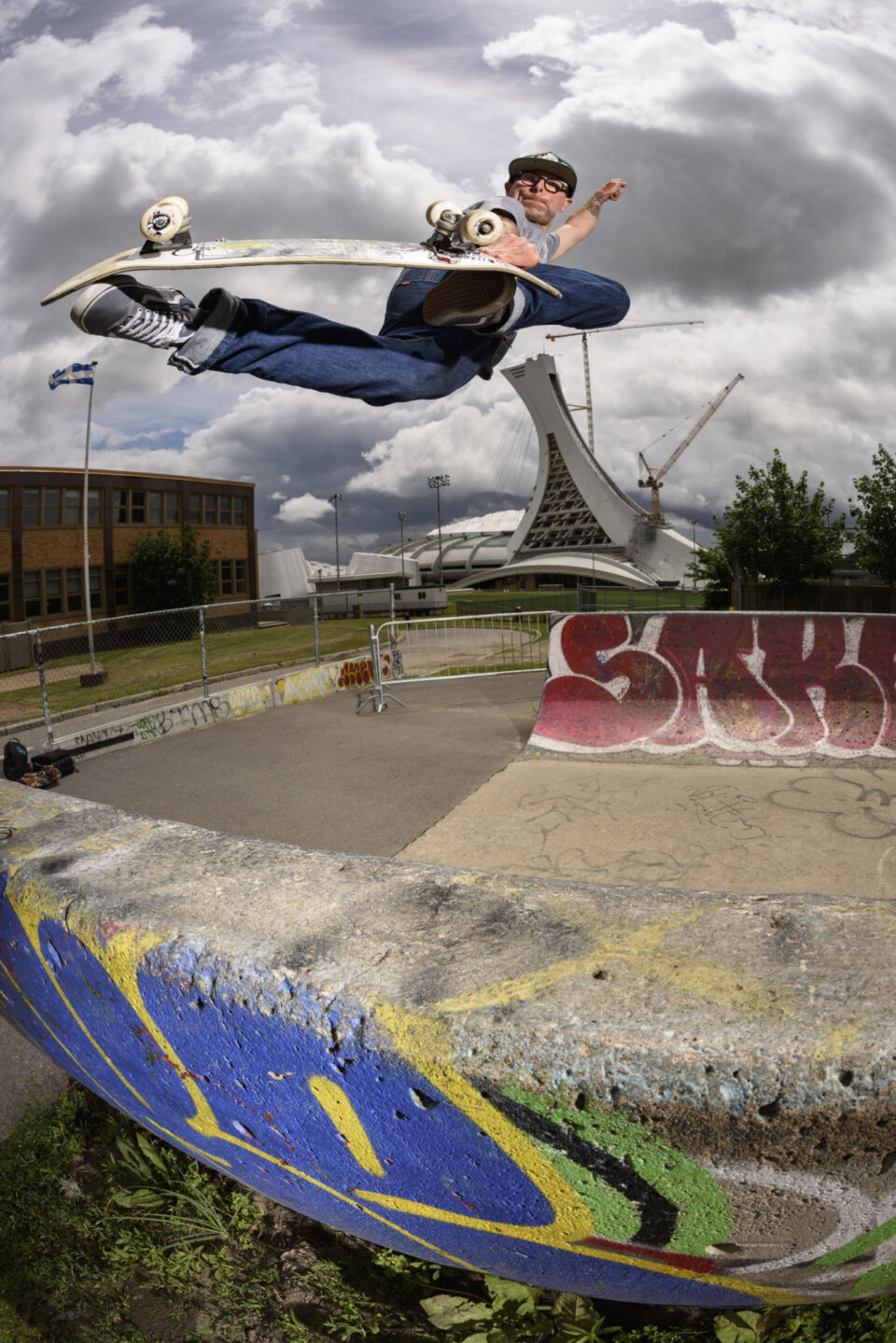 Skateboarding has flourished at The Pipe over the years—locals and tourists alike have always visited this small, tight, gnarly spot since the mid 70s—but the late 90s and early 2000s were a rough time for transition skateboarders everywhere. Montreal was no different. Skateparks closed all over the place and so, with not much else to skate, sessions at The Pipe became more frequent. Barry Walsh and Marc Tison (two Montreal rippers and Big-O locals—Marc is nicknamed “The Caretaker” of The Pipe) even ended up moving back to Montreal, so desperate were these trying times for transition skaters. Friday night after work and Sunday during the day became the most popular session times. The Sunday session was extra special because the stadium hosted Mexican house-league soccer games. Families would come to watch the soccer games and so vendors would set up stands selling homemade Mexican food and cold beers, much to the delight of everyone, especially us, the skaters. The Pipe became a real hot spot for skating at the time. The August of 2000 issue of Thrasher Magazine, for instance, featured an article by Marc Tison about Big-O titled, “Natural Mystics.”

In May of 2005, the Montreal Impact, a local soccer team, announced they were hoping to build a new stadium (Saputo Stadium) on the Olympic grounds. At the time, none of us took much notice. It wasn’t until 2006 that some plans for the new stadium were published in the local newspapers that we finally realized that the future of our spot was in danger. The new Saputo Stadium was set to be constructed right on top of the old soccer field—a little too close for comfort.

After nearly every subsequent session, while chilling with a couple of cold ones, we would talk of strategies to save the Pipe. As with most beer talk, it was just talk and nothing came of our plans. We didn’t want to lose our spot, but what could we do?

A small group of us did attend a city council meeting and we used our opportunity to speak to the city council about our love of The Pipe, but our appeals earned little more than a lukewarm response.

Tony Hawk has performed demos for thousands inside the stadium, but he had never skated the Big-O pipe until recently. F/s lipslide. Michael Burnett

Then one day Stephan Gauthier (aka Ti-Gras) handed us a copy of the original blueprints for the Big-O Pipe. I’m not sure why seeing the blueprints changed anything—maybe they just gave us a deeper understanding of our spot’s history?—but, in my opinion, seeing those blueprints was the spark that lit the fire under our butts. That, and also one day when we arrived at the Pipe we found it had been painted beige. Graffiti had been a part of The Pipe experience since the very earliest days, but suddenly Big-O was completely naked and it scared us into action.

Using a contact at a local newspaper, we got an article published about The Pipe’s plight. Once that happened, the other publications all wanted their own stories—I guess everyone loves a David and Goliath story? The news coverage then caught the attention of the Régie des Installations Olympiques (RIO), the group that runs the Olympic Stadium grounds. Marc Tison was contacted by RIO President, David Heurtel, and they began an open dialogue about the future of The Pipe. 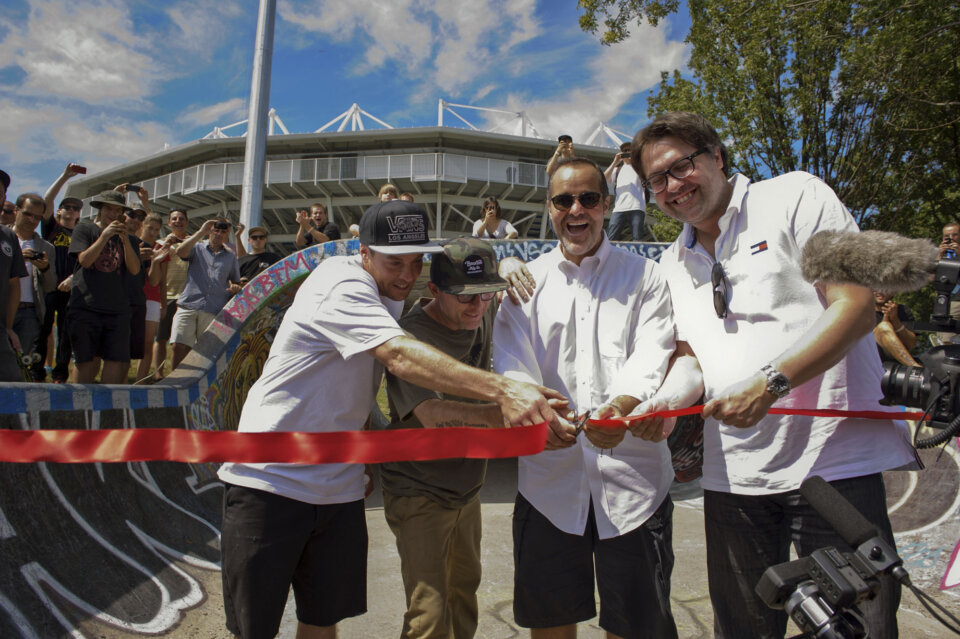 Meanwhile, Richard Desmarchais (aka Big Rich) began editing a documentary on the history of the Big-O Pipe using the decades of footage he himself had accumulated along with footage he collected from Canada’s National Film Board. Richard’s documentary, called Concrete Angels, would be used to sell the long and storied heritage of the Pipe to the RIO group, et al. Barry and Marc added to the presentation by publishing a book on The Pipe’s history, titled Pipe Fiends, filled with stories, images, and magazine coverage. All of the documentation—the film, the history of the spot’s coverage, and the book—showed how important Big-O is to Montreal skateboarding, but also to the skateboard community across the world. After seeing the history of Big-O laid out before him, Joey Saputo, President of the Montreal Impact, said he had no idea that the spot was so important to Montreal skateboarding. Joey is a huge fan of sports and that ended up working in our favor.

Amazingly, the Impact and RIO worked out a way to save our beloved Pipe. The Pipe would once again be employed as an entrance tunnel, but now for the new Saputo Stadium. The only downside was that we would not be allowed to skate the pipe on game days. We didn’t even have to fight Goliath because Goliath graciously agreed to help us preserve one the world’s great skateboard spots. 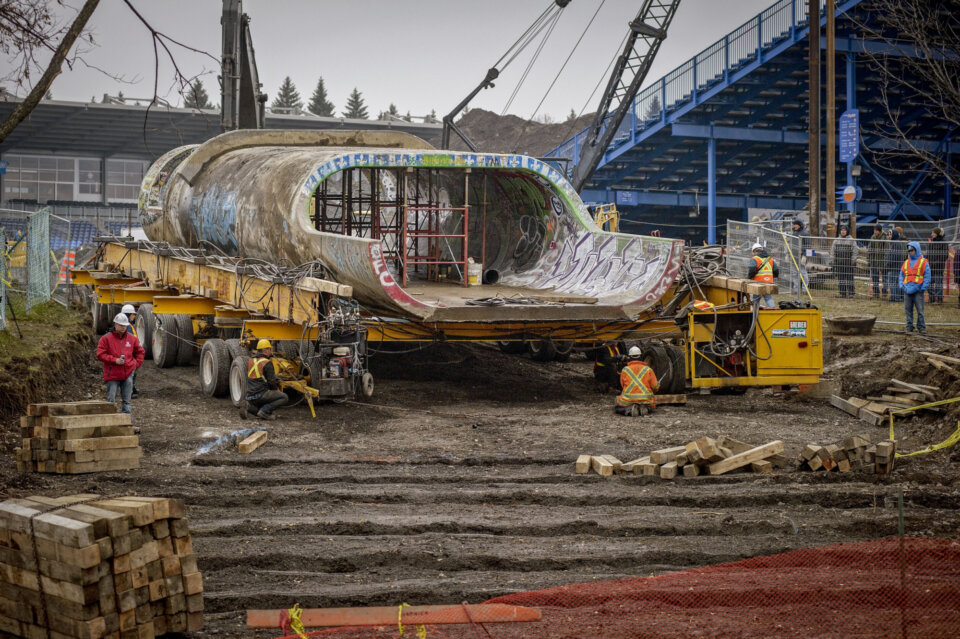 The Big-O Pipe gets her own set of wheels. Dan Mathieu

Around 2010, talks of the Impact joining Major League Soccer (MLS) began. To be part of the MLS, however, the Saputo Stadium required multiple upgrades and, unfortunately for us, one of those included a huge light pole right where The Pipe stood. The Impact, RIO, and skaters went back to the drawing board to figure out a new solution for Big-O’s future.

The two plans on the table were, 1: destroy the Pipe and rebuild it somewhere else on the Olympic grounds, or, 2: move the Pipe intact to a new location on the Olympic grounds. Both plans were estimated to cost roughly the same amount of money. The skaters decided it was less risky to move The Pipe than to build a new one. So a new location was chosen about 80 feet down the hill from the stadium. We wanted the same orientation to the sun, the same slope from the end of the full pipe to the halfpipe section (there is a slight slope that makes starting from the full pipe easier), a paved pad for skaters to start their runs, and we also requested trees be planted around the new site to replicate the foliage that shaded us at the original location. Somehow all our demands were met and the Impact soccer team footed the bill (approximately: $63,000 CAN) to move Big-O 80 feet down the hill. 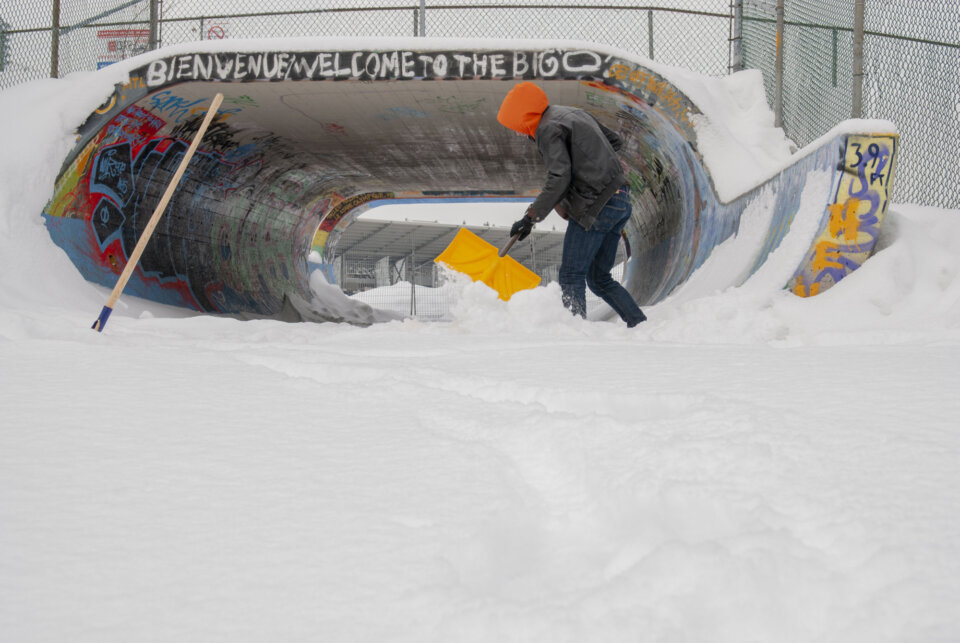 Don’t forget: it’s in Canada so during the winter the whistle turns into an ice cube tray. Dan Mathieu

The move took months to prepare, execute, and complete. During that time, The Pipe was closed behind a construction fence. In the fall of 2011 the big day had come for the Big-O to go for a big roll herself. Easier said than done. Moving the 175 tons of cement down the hill was an enormous job where all kinds of problems could have occurred. With cross bracing inside the fullpipe, steel beams dug under her, which were then lifted onto a bunch of dollies, she was able to slowly roll to her new resting spot in one piece without a single crack. We started getting excited about being able to skate Big-O again, but winter was approaching and the landscaping would have to await the spring. 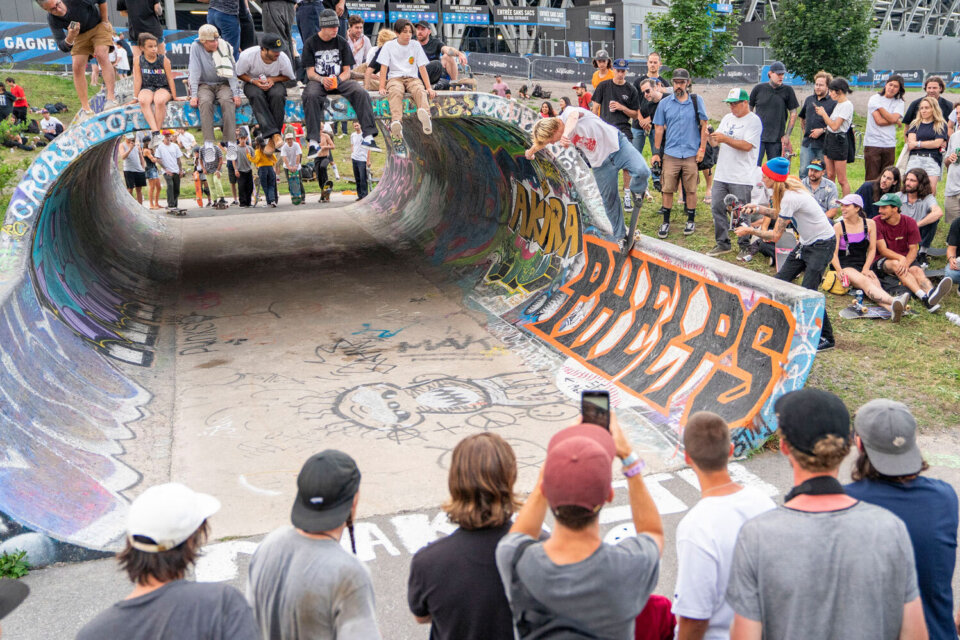 In early spring we got some bad news: during construction of the expanded Saputo Stadium a massive pile of excavated dirt had collapsed the roof of the underground parking garage next to the site of The Pipe. We were reassured that the Pipe was not affected by the collapse, but the repairs were estimated to take another year. More waiting. Finally, in 2013, the Big-O Pipe was resurrected and reborn. Marc Tison, with assistance from RIO, threw a big re-birthday party attended by skaters from all over the world, and the Pipe fiends finally got their home back. Big-O lives again.

The list of people involved in saving the Big-O Pipe number in the hundreds, from Montreal locals, to their family and friends, to photographers, magazine editors, the RIO staff, the Montreal Impact soccer team, and especially its President, Joey Saputo. It’s an astonishing accomplishment, amazing that it was even considered in the first place, and the relationship between the skaters, the RIO group, and the Impact has grown stronger ever since. The RIO has expanded its support of skateboarding by developing a relationship with Vans. On the other side of the Olympic grounds, for instance, there is now a Vans Park Series bowl created to host contests and events. A who’s-who of transition skating now comes to Montreal for the annual VPS competition and nearly every competitor visits the legendary tunnel (especially for the Thrasher “Masher” after sesh) and wets their whistle in the Big-O’s tight, gnarly transitions.