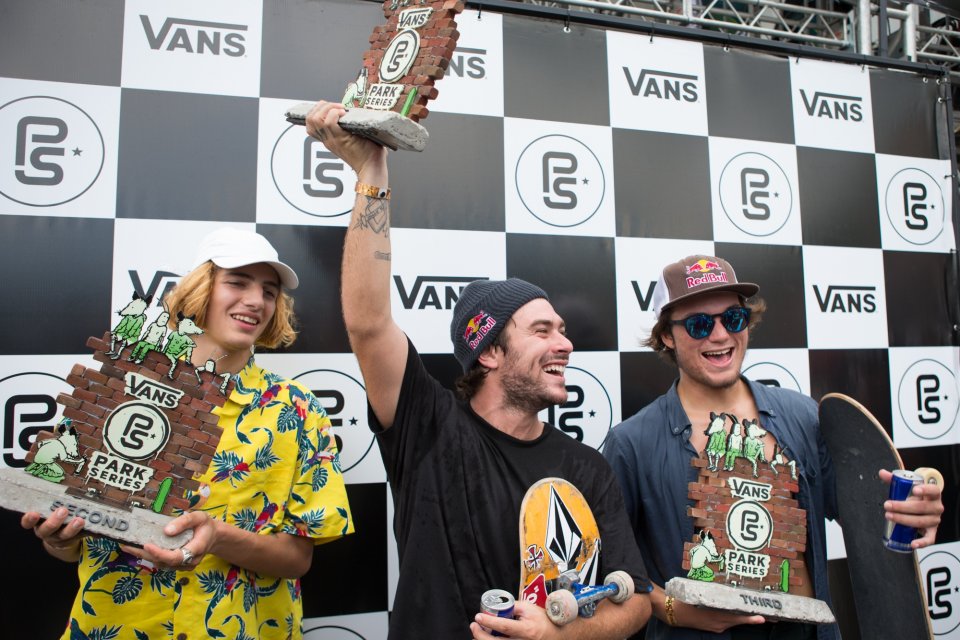 Crediting the passionate Brazilian skate scene in his victory speech, Barros said, “it’s skateboarding. It’s the heat. It’s that flame that will always be alive. When it’s done with passion, and truly done, you’re going to see everyone give all they’ve got.”

Italy’s Ivan Federico returns to the podium for his second runner up win to maintain his momentum as a star player in the series, while Alex Sorgente squeezes in third place thanks to an impressive comeback run in the finals.

The 2017 VPS Pro Challenger rankings continue to be led by Australia tour champion Tom Schaar, who was edged out of the Brazil podium by Sorgente in the final minutes of competition. Trailing Schaar on the Challengers leaderboard, São Paulo native Murilo Peres proved himself as a crowd favorite throughout the semis and finals.

The 2017 Vans Park Series Pro Tour is the premier league for professional park terrain skateboarders consisting of five men’s global qualifiers and one women’s global qualifier spanning five countries over six months and culminating with the official Vans Park Series World Championships. The 2017 Vans Park Series World Championships are sanctioned by the International Skateboarding Federation and will be held in September with final date and location to be announced on vansparkseries.com along with additional Pro Tour details.

Showcasing an international roster of skateboarding’s elite pros and a total prize purse in excess of $500,000(USD), the Vans Park Series uniquely defines the park terrain format with its exclusive points system, judging guidelines and qualifying park terrain course criteria. Additional information will be available on vansparkseries.com, and catch all the Pro Tour stops live on Red Bull TV all season long.

Red Bull TV is a digital video service that features inspirational programming from the world of Red Bull, including live global events and an extensive selection of sports, music and lifestyle entertainment.  Red Bull TV is available on the web, connected TVs, gaming consoles, mobile devices, and more. Accessible via the web at www.redbull.tv and its Android, iOS and Windows Phone applications, Red Bull TV is also available as a pre-installed channel on Apple TV and Samsung Smart TVs and as a free, downloadable app on Amazon Fire TV, Kindle Fire, Chromecast, Nexus Player, Roku Players, Roku TV models and Xbox consoles.

The Art Of Judging Art

Pump Up The Jam