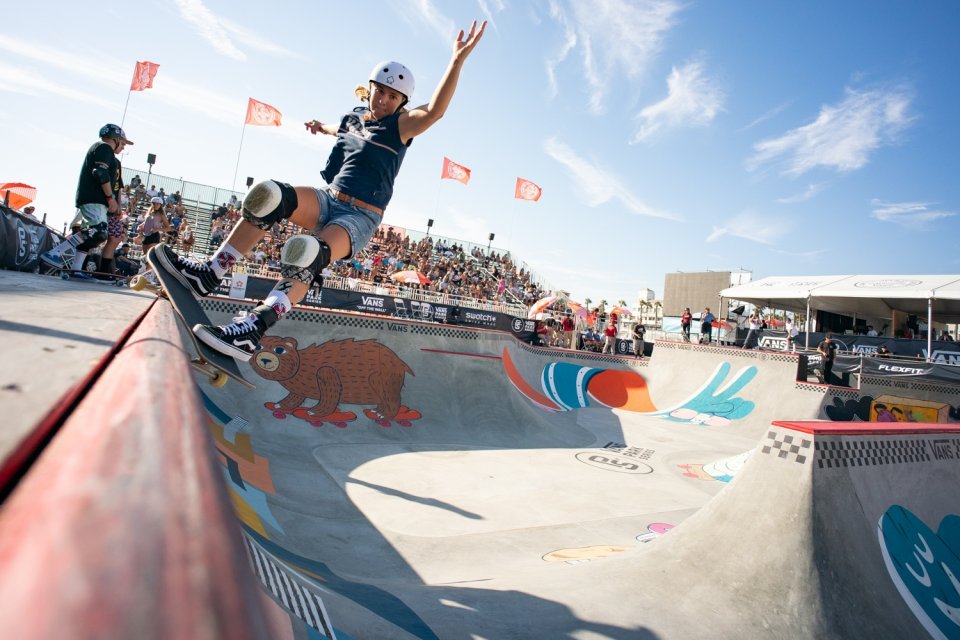 Huntington Beach, CALIF. (August 2, 2018) – The 2018 Vans Park Series Women’s Pro Tour prelim and semis rounds came to a close today, to determine the top eight lineup for finals on Saturday, August 4. Taking the lead early and topping the field in both the prelims and semi’s, open qualifier Bryce Wettstein made a strong impression on the judges, earning the highest score of the day with a 91.73, while Japan’s Sakura Yosozumi trailed closed behind, returning to the VPS spotlight after winning the Brazil tour stop earlier this year. Select Pros Kisa Nakamura and Lizzie Armanto also made a comeback with clean and flowy lines, followed by a last minute score shuffle by current Women’s park terrain World Champion Nora Vasconcellos, who snuck into 7th place at the last minute in her final run of the day.

For complete results of this week’s contests, visit www.vansparkseries.com for more information.

Up next, the 2018 VPS Men’s Pro Tour open qualifier will commence on Friday, August 3, for another elite showcase of park terrain skateboarding. Invited tour challengers from all over the world will have a chance to compete against top-seeded VPS Men’s Select Pros, in pursuit of valuable points toward their global rankings and a chance to compete in the World Championships in China this October.

Vans Park Series reveals a brand new, custom-spec concrete park built directly on the sand in Huntington Beach, in conjunction with the Vans US Open, the largest action sports festival in the world. With new and unique elements to challenge and inspire the VPS pros, the park features a subtle twist on the center island jump box that incorporates a jersey-barrier inspired spine, along with a variety of re-designed hips, layback banks, and extensions, all arranged in an open-flow format to allow the riders an abundance of different ways to take over the course.

With thousands of spectators descending upon the Vans US Open, the highly-anticipated summer event will feature an immersive creative experience, filled with world-class surf, skate and BMX competitions, in addition to the interactive Van Doren Village, which will host art exhibitions and hands-on creative workshops for attendees. Visit www.vansusopenofsurfing.com for more information.