John Cardiel is surely in the running for one of the best—if not, THE best—to ever skate Burnside. F/s smith grind. Bud Fawcett 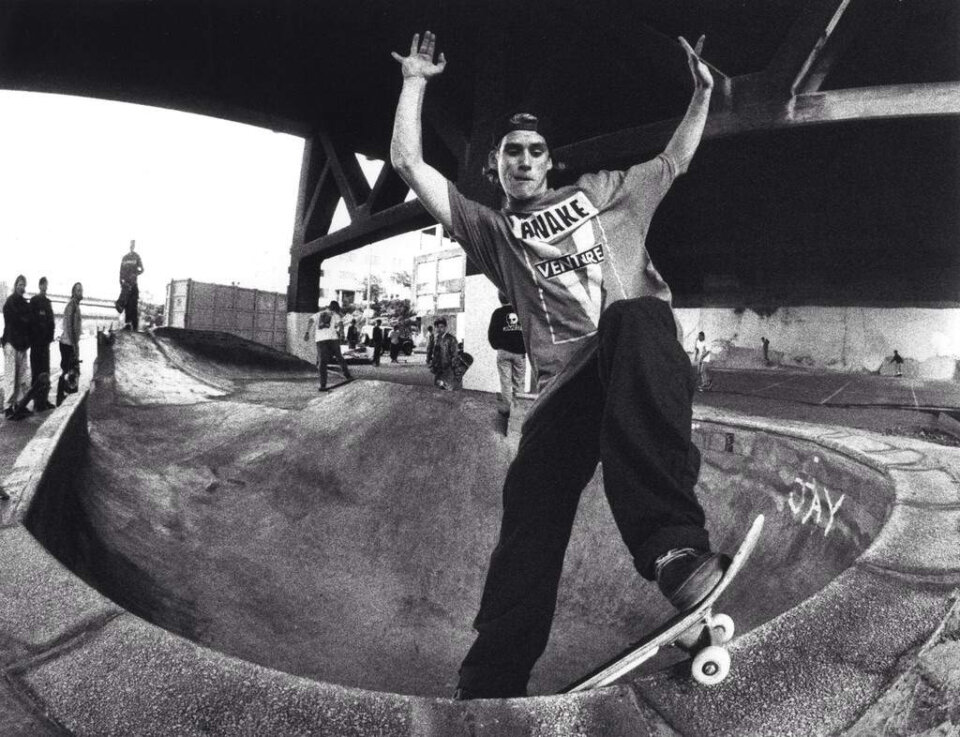 Halloween marks the 29th birthday of Burnside, the most iconic DIY park in skate history.

Hello, my name is Dave Carnie and I’m going to be populating the VPS site with entertaining jibber jabber until the start of the 2020 Park Series — I’m sort of like a rodeo clown between bull riding. Since the majority of the posts here will be related to VPS, and transition skating in general, it is with great pleasure that we begin our off-season coverage with a post dedicated to Burnside’s 29th birthday and 2019 Halloween bash which is set to go down in Portland under the bridge this Thursday, October 31.

Considering what Burnside means to the history of skateboarding, the annual Halloween/Birthday party at the park under the bridge should be recognized as an international holiday in the skateboarding community. It could be argued that the Vans Park Series itself wouldn’t exist if it weren’t for Burnside. Now, more than ever, with the Olympics on the horizon and governing bodies comprised of rollerbladers writing rules and regulations for skateboarding, it’s important to recognize and pay tribute to the true spirit of skateboarding wherever we find it—and there’s almost no better representation of that than Burnside. We’ve all heard the story of Burnside a million times, but it really is of supreme significance to the history of skateboarding. Let me show you why.

Grosso’s Love Letters to DIY parks is an excellent introduction to the Burnside ethos and its brood.

While skateboarding begins in the early 20th century (I would argue it goes back even further), and “sidewalk surfing” was very popular in the 50s and 60s, the modern skateboard era begins squarely in the 70s. There were a few events/innovations that accelerated its growth during that decade:

In short: skateboard technology advanced and the terrain got more radical making the last half of the 70s one of the most intriguing periods in skateboard history. But, strangely, the good times didn’t last long. 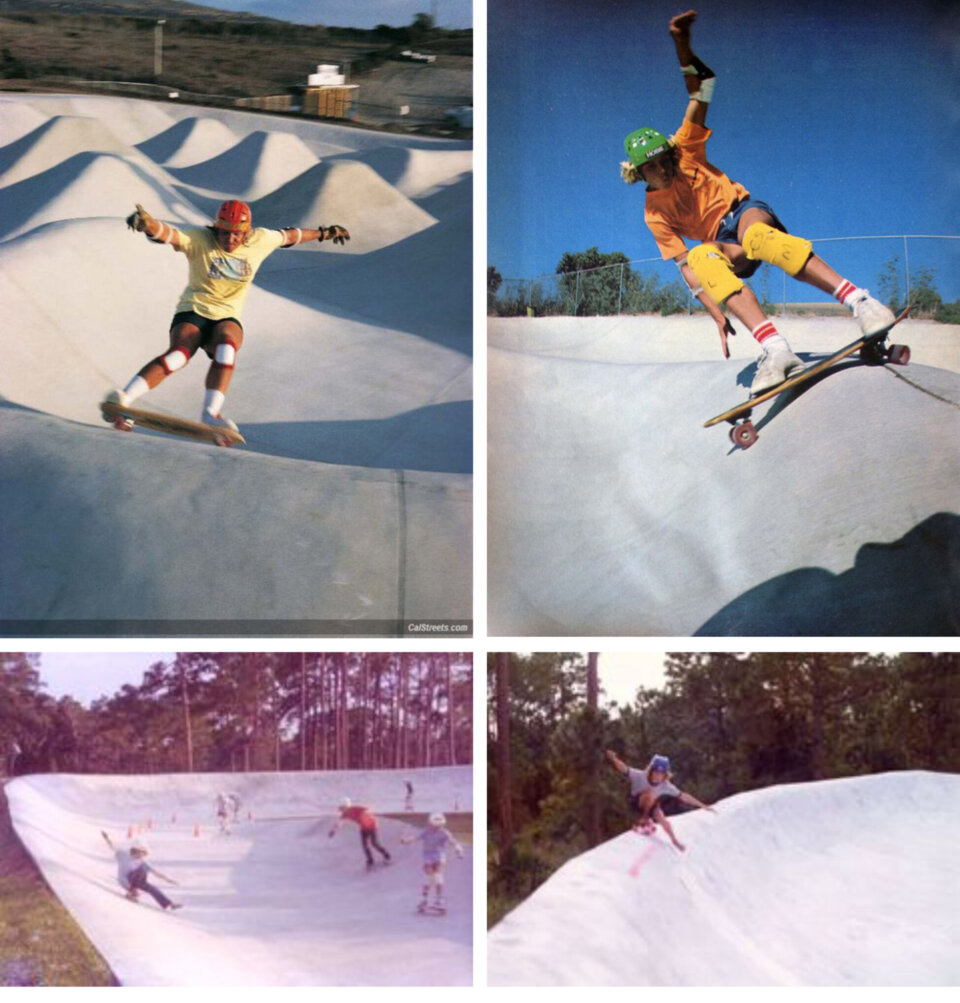 The top two photos are from the Carlsbad Raceway Skatepark, the bottom two are from Skateboard City in Florida.

One week after Skateboard City opened in Florida, the Carlsbad Raceway skatepark opened (and, due to its greater popularity, is often mistakenly called the “first” skatepark). Following those two parks, hundreds of skateparks opened across the US and around the world. Skateboarding was much like the gold rush with prospectors from all over the world trying to cash in on the new fad, but much like the gold rush, the treasure was gobbled up in a very short period of time. Within four years nearly every one of those enormous expanses of undulating cement would be shuttered and bulldozed due to insurance legislation. In four years—FOUR YEARS—we went from no skateparks existing anywhere in the world ever, to hundreds of skateparks everywhere, and then suddenly back to no more skateparks. With no skateparks, there was no money, and so by 1980 skateboarding was dead. Again.

Except that it didn’t die. While most retired their skateboards and occupied themselves with other things — MTV, Rubik’s Cubes, Donkey Kong, punk rock, trickle-down-economics, etc.—a small community of skaters, who had tasted what urethane wheels and cement transitions could provide, refused to let it die. And so they built their own skateparks. In backyards. Out of wood. And thus the backyard ramp was born and a small, underground scene flourished.

"When that first nail was pounded into plywood, it was the shot that was heard around the world." 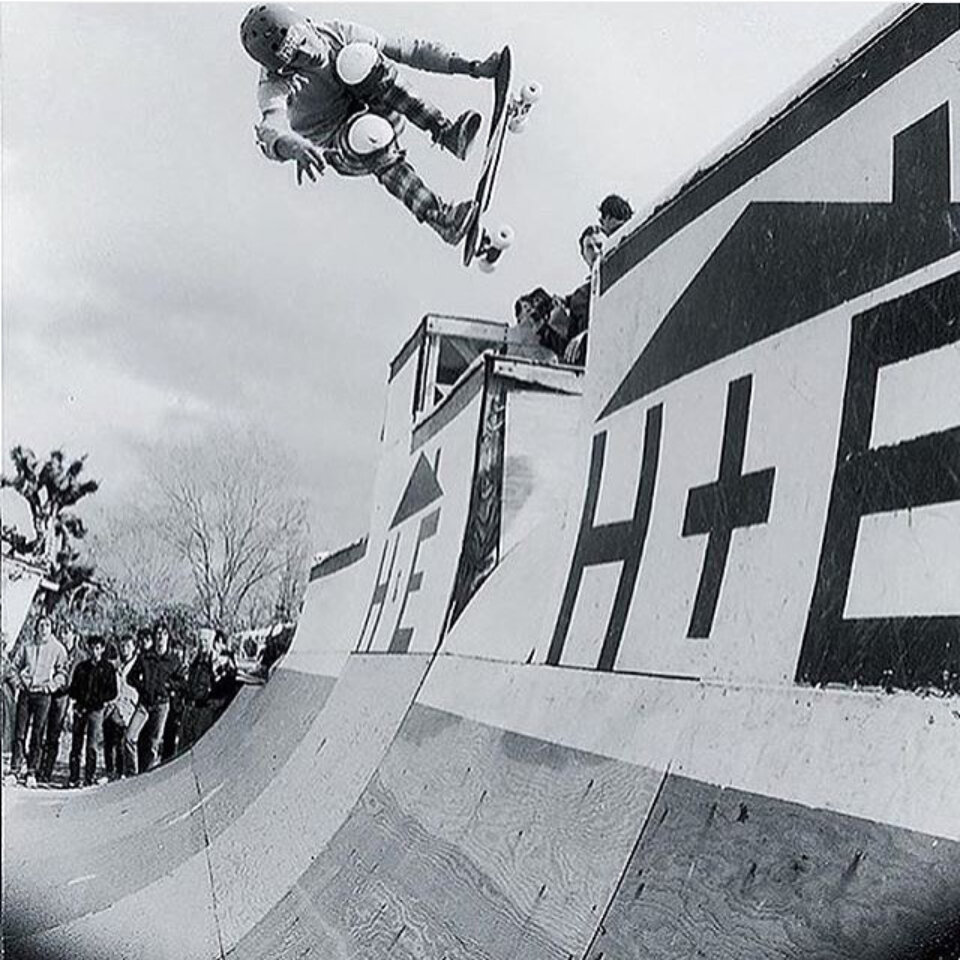 Steve Caballero, fakie thruster over the channel at The Great Desert Ramp Battle, where he took first place. (There’s some debate as to whether this was the first backyard ramp contest, but one thing we do know: Thrasher’s article on the contest appeared in their April 1983 issue.) 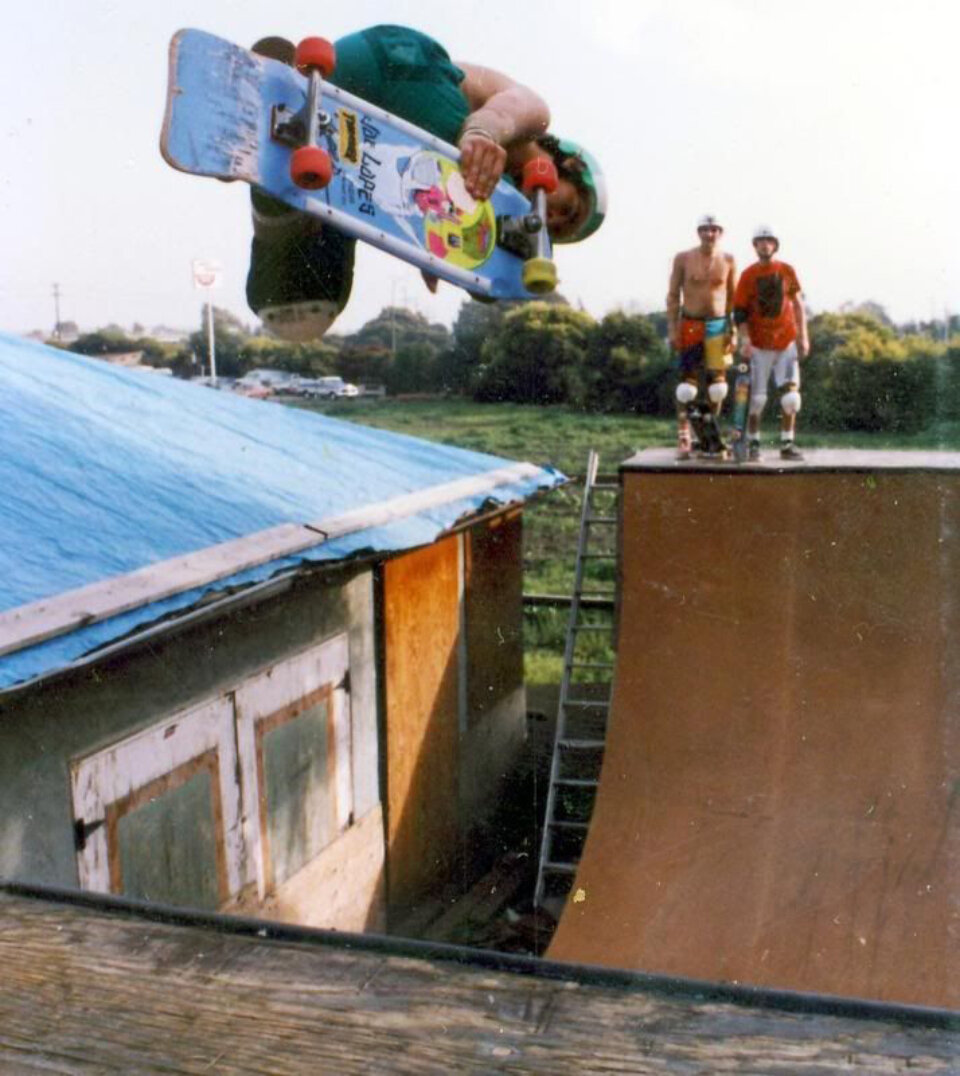 Joe Lopes (RIP) blasting a b/s air in his own backyard. (Pretty sure that’s Bod and Steve Douglas on the opposite deck?)

I’ll likely return to this era in a future post, but for our purposes here we need only recognize that the 80s represent a significant DIY moment—probably doesn’t surpass the creation of the skateboard itself when someone hobbled a pair of roller skates and a 2x4 together, but it’s still significant because that spark of DIY creativity will arise again and again as a defining element of the skateboard ethos.

As much as I’d like to languish in the 80s and talk about spandex’s role in vert skating, we are going to fast forward ten years to 1990 and another skateboard obituary: vert (and transition skating in general) was murdered! And the murdered was the skateboard industry itself. Vert skating was usurped by its antithesis, street skating, and all anyone could talk about for the next two decades was street. My friend, the director, Alex Craig, called the 90s “skateboarding’s teen years.” 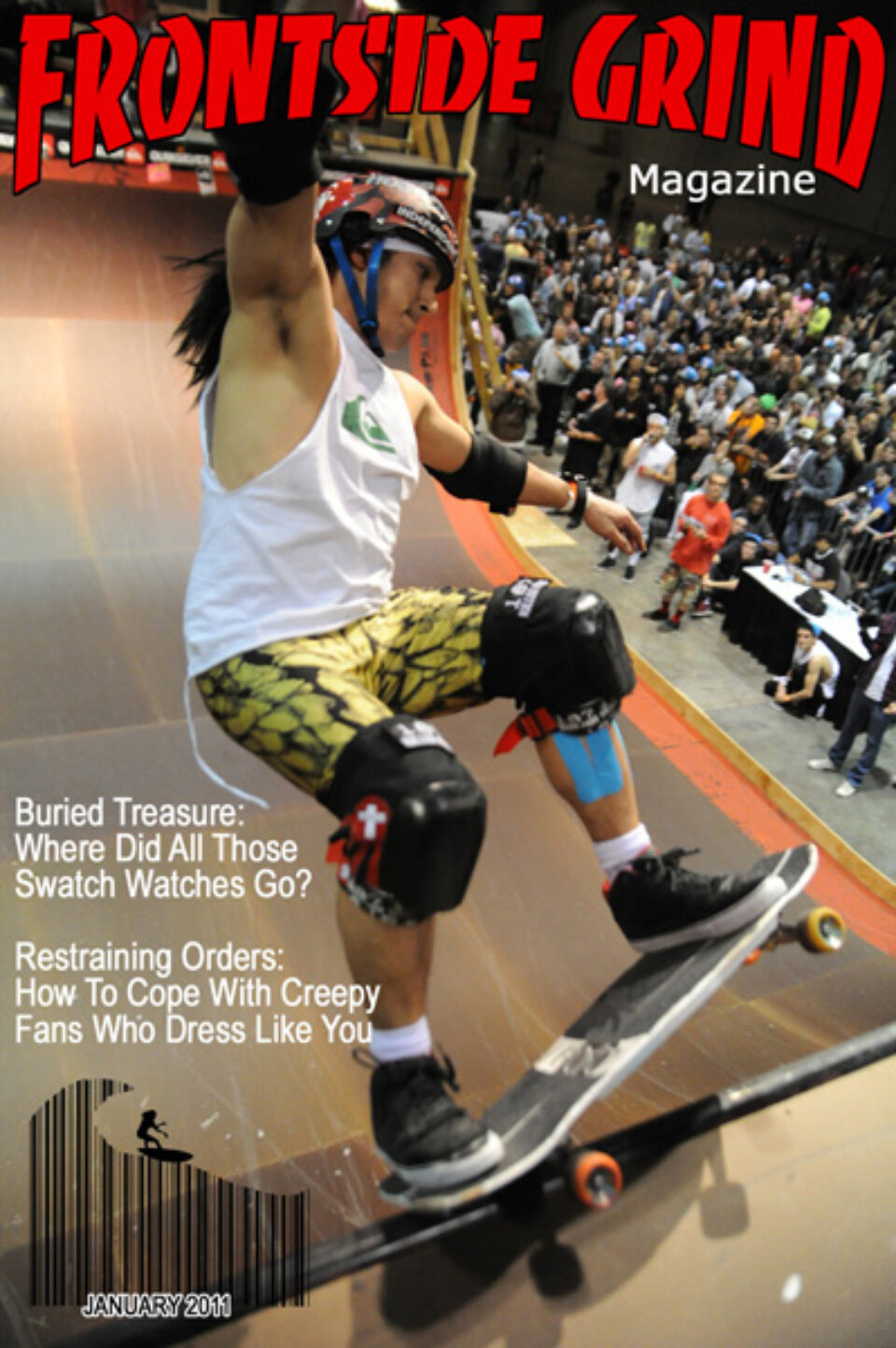 If the 80s were about neon and spandex (Hosoi, above), then the 90s’ rebellious response was Jnco Jeans (Goofy Boy, below).

If you accept my dating of modern skateboarding’s birth in the mid 70s, then, yes, in the year 1990 skateboarding would have been around 15 years old. Typical of every bratty teenager, street skating was belligerent, selfish, and all about ME ME ME ME! Street skating took over the industry and its ensuing popularity eclipsed all other forms and styles of skateboarding. During the 90s, magazines rarely ran photos of transition skating and any vert skating in a video (which also became more and more rare) was pejoratively nicknamed, “The Fast Forward Button.” A 1992 Thrasher cover read: “Who killed vert?”

This was an interesting period in skateboarding for a couple of reasons.

One, the aesthetics of skateboarding changed. Previously skateboarding wasn’t so much about what you did on your board, but how you did it—it was about style. With the emergence of street skating, however, the emphasis was more about what you did on your board than what it looked like—difficulty was awarded more points than style. It was a natural progression—skill level increased and skating got way gnarlier. I remember in the mid 90s Natas commented on the level of talent in street skating by saying, “I was pro when skateboarding was easy.” 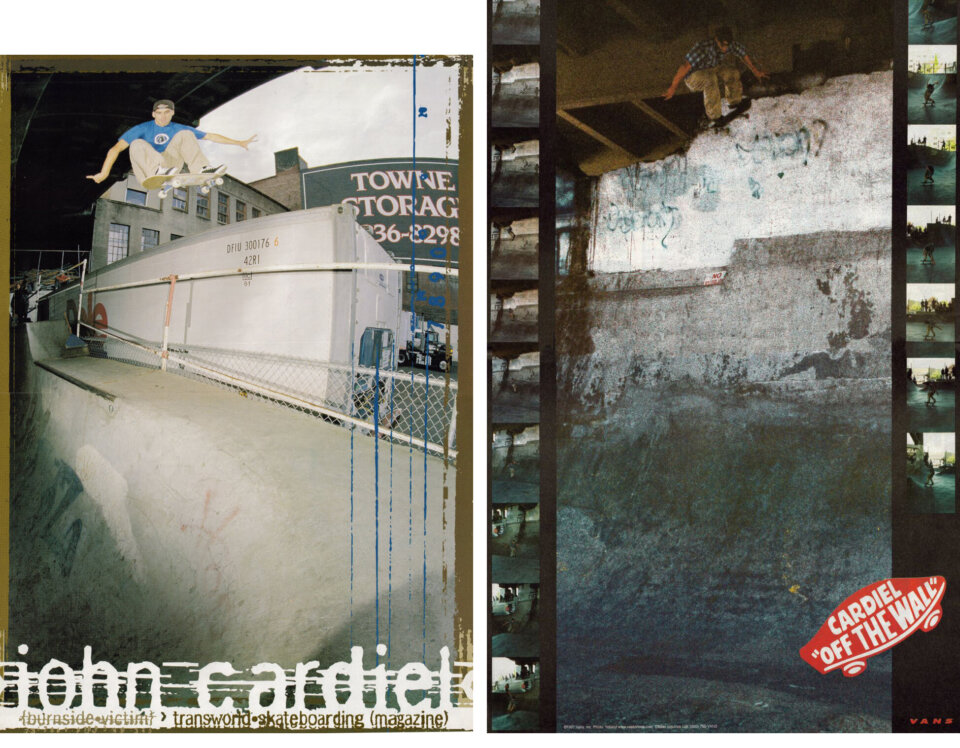 Cardiel found a few lines at Burnside. Just a few.

Two, beneath all the commercial hoopla, a curious breed of skater emerged. He/she was something in between a vert skater and a street skater. They were powerful skaters who were drawn to transition, but since they had grown up in an era dominated by street, they were also endowed with technical prowess. They were a synthesis of the stylish tranny skater of yore with the nimbleness of a modern street skater. John Cardiel has always been recognized as one of best examples of the category, but there were dozens—Omar, Wade, Trujillo, Ethan, Senn, Peterson, Chalmers, Shao, etc.—way too many to name here. To call it a “category” of skateboarding, however, is to do it a disservice because the defining element of this type of skater was that they couldn’t be defined—they skated everything and they were adept at it all. And thus they came to be known as ATV (all terrain vehicles) skaters. (No one likes the term “ATV.”) And while ATV skaters were largely nomadic (because far flung foreign countries like Brazil and Australia didn’t have the same skatepark insurance problems we did in the US), they came to be symbolized by a singular location: Burnside. 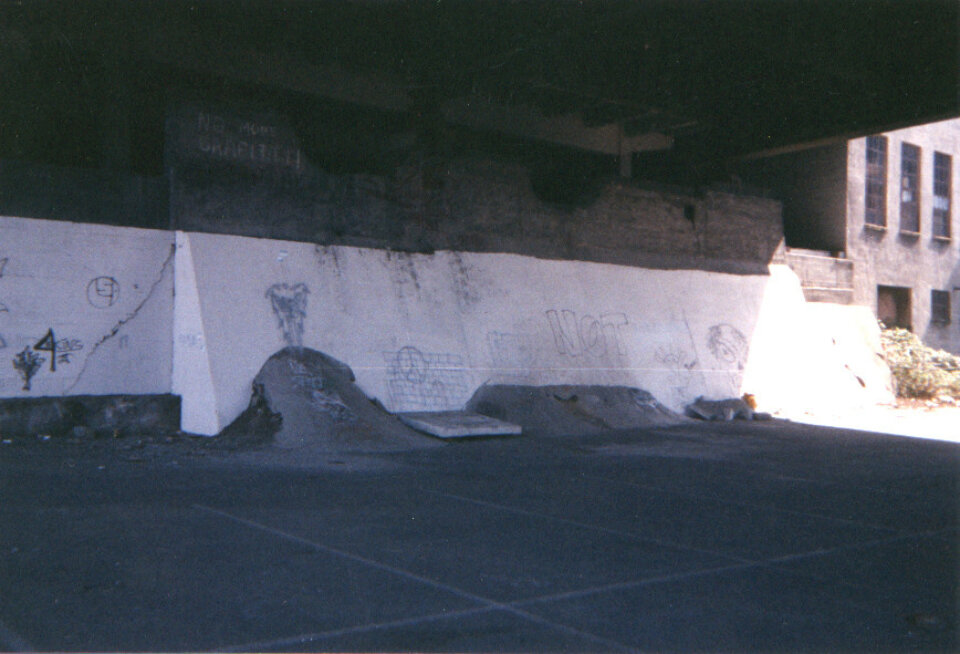 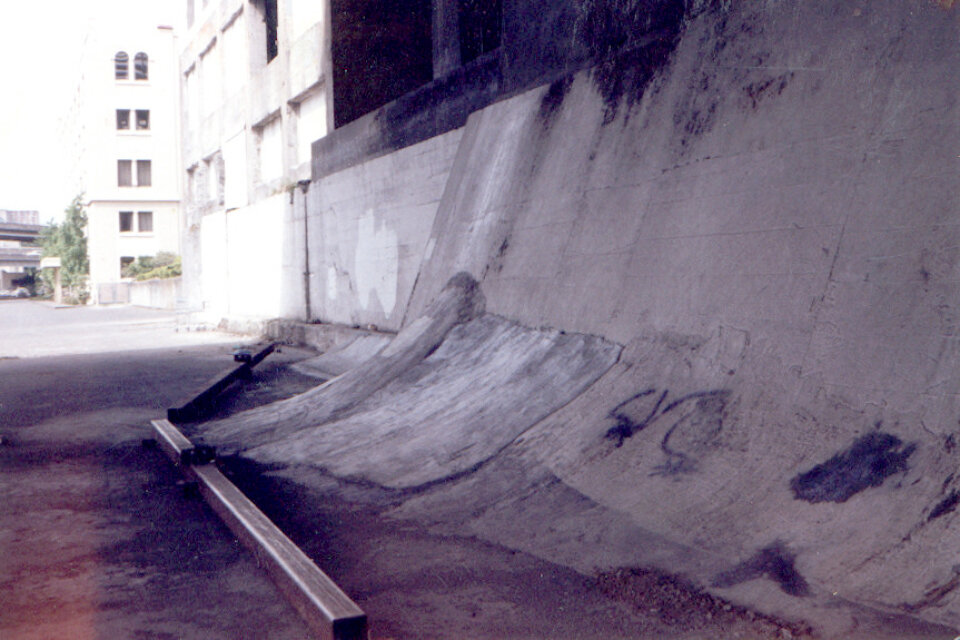 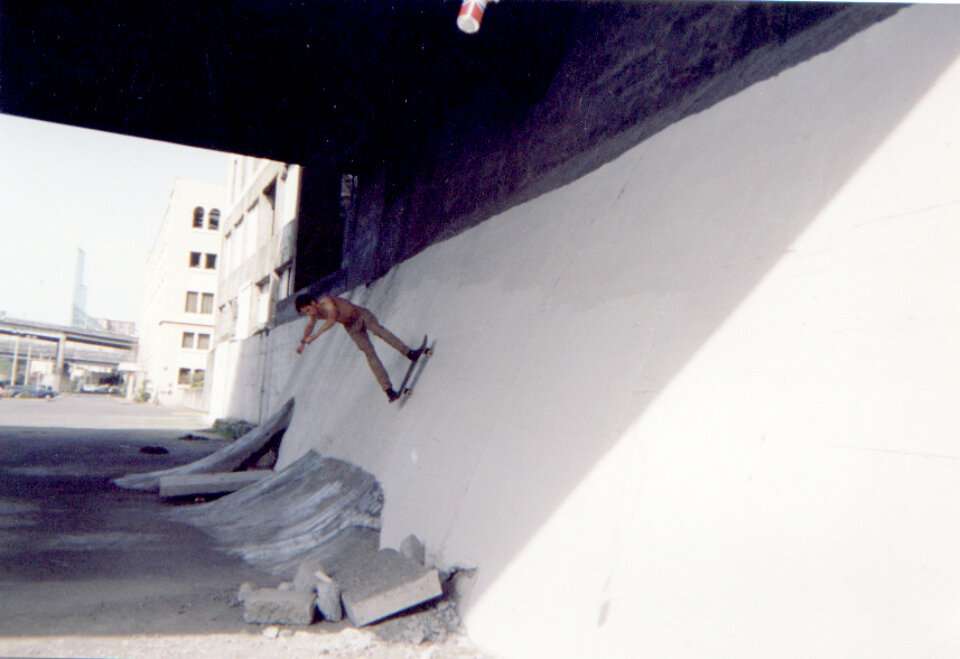 These are three of the earliest images of the first cement poured at Burnside, the bank to wall—or, as I like to call it, the cement turd. “First banks at Burnside. Best those transitions ever felt, in my opinion.” —Unknown Burnside local.

I’m not going to attempt to retell the murky history of Burnside, but I do want to give thanks and emphasize the importance of this place to skateboarding, and the spirit that brought it into existence. Just like the backyard ramp boom in the 80s, the small group of ne’er-do-wells who, one night in 1990, poured some cement against a banked wall in an empty lot under the Burnside Bridge in Portland, Oregon took skateboarding into their own hands and launched a revolution.

Burnside didn’t arise in reaction to street skating, it began simply because some crusty Portland skaters wanted something to skate when it was raining. And so they poured a lump of cement against a wall. It’s astounding how much that sad little lump would come to mean to skateboarding’s future. I mean, look at that thing: it’s a cement turd, really. But that lump, and the park that grew out of it, was an inspiration to skateboarders everywhere. I think the general response was, “Wait. No wood? We can pour cement and build actual skateparks?”

Most importantly, I think the construction that went down at Burnside was one of the clearest corporeal manifestations of skateboarding’s inherent punk rock mentality. Skateboarders, by their very nature, are sort of akin to anarchists, they don’t follow society’s usual rules, and Burnside is essentially a monument to that philosophy. It said to skaters everywhere:

Do what you want until somebody tells you NO. 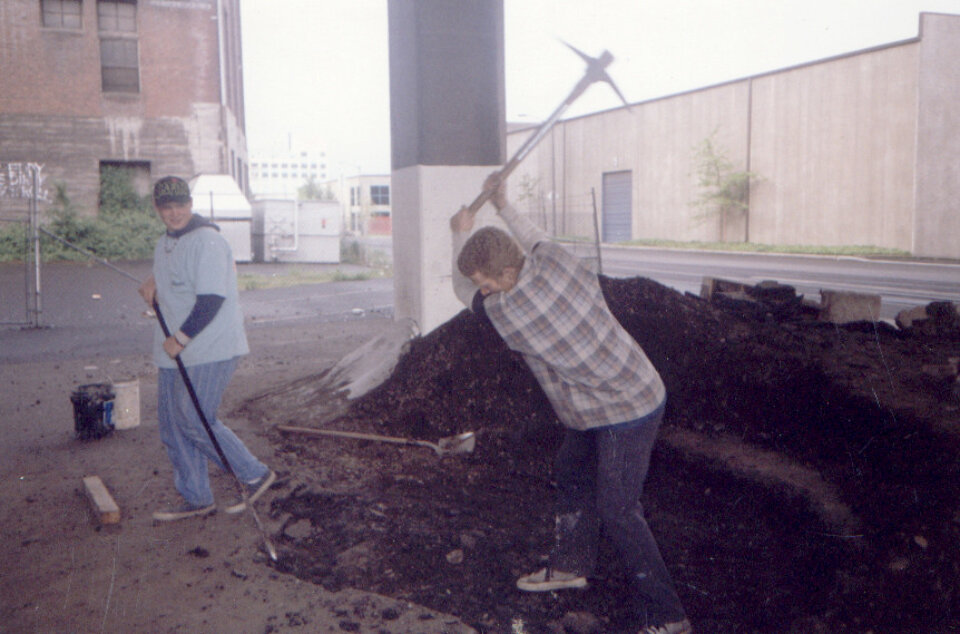 Think about how brazen construction at Burnside was: they just started digging a hole in a parking lot that didn’t belong to them. “Pat the Q-Man breaking ground for the big bowl (1991).” Burnsidepics.blogspot.com 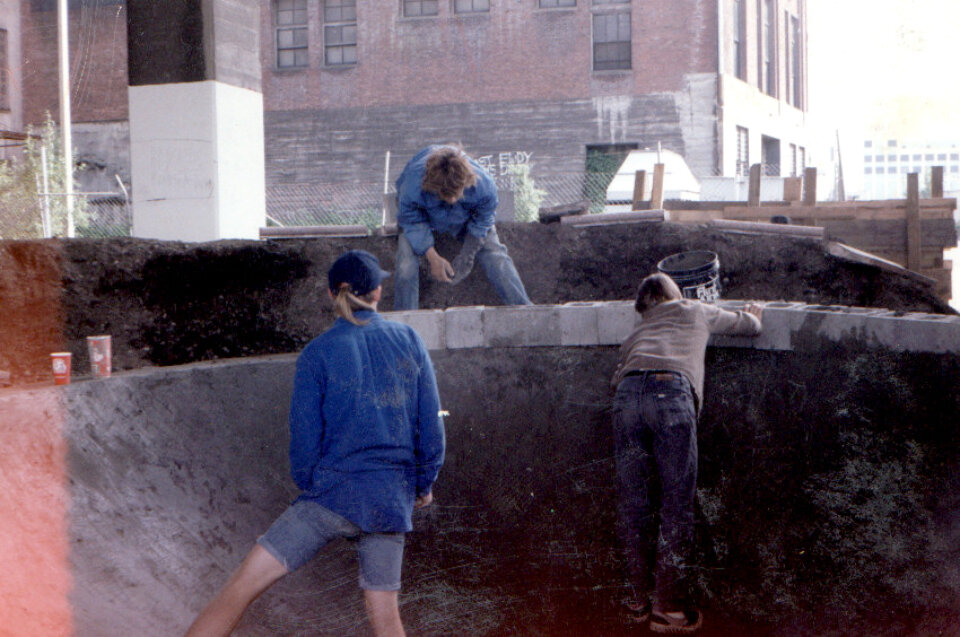 The message was heard loud and clear because there was an explosion of DIY cement parks built all around the world thus fueling a new generation of tranny skaters who, in turn, fueled the need for even more parks to be built. And build they did. Slowly but surely, transition skating began to emerge again as a respected discipline and arena in the evolution of skateboarding.

All the skatepark construction companies that came out of Burnside (Grindline, Evergreen, Dreamland, etc.) have been at the forefront of skatepark design and construction ever since. They deserve praise and recognition for the proliferation of facilities that have been built around the world in the last two decades. And, again, there probably wouldn’t be a Vans Park Series if it weren’t for the skatepark renaissance that began under a bridge in Portland. (It could even be argued that Burnside is partly responsible for the discipline of Olympic park skating. “Thanks Burnside!” Here’s a fun sportscaster-style interview question I’d like to ask: when you guys were building Burnside, did you ever imagine that it would become the inspiration for an Olympic sport? Because you know NBC is going to do a little expose on Burnside, right?)

Thus, I would like to submit a proposal to recognize Burnside’s birthday as an international holiday—to who we submit this proposal, I’m not sure? Is there an International Holiday Commission or something? Anyway, it would be very easy to do since Burnside’s birthday already falls on a recognized holiday, Halloween, so we can just roll International Burnside Day into the festivities—sort of like how the Roman Emperor Constantine declared in 336 that December 25 was Jesus’ birthday because it was already a pagan holiday in celebration of the sun god, Sol Invictus. Sun god, son of god, same thing. Anyway, from now on we will call October 31: HALL-International Burnside Day-OWEEN.

We should probably work on the title of the holiday a little more, but the point is: thank you, Burnside, and thank you to everyone who helped build and maintain it over the years. Happy 29th birthday and happy HALL-International Burnside Day-OWEEN. 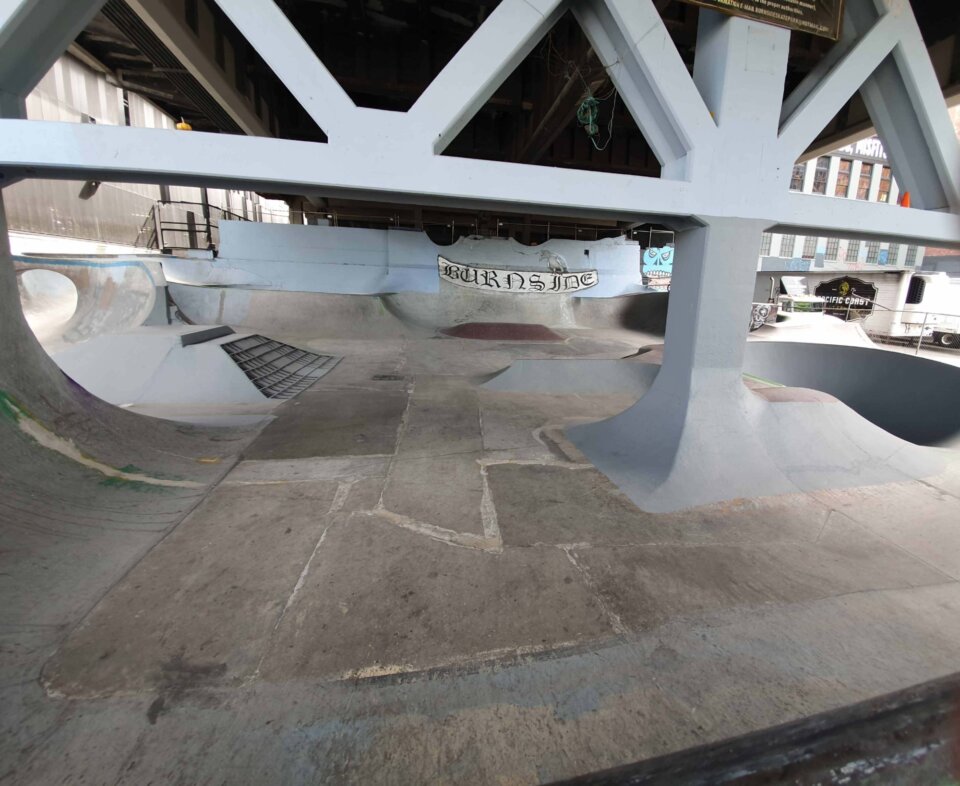 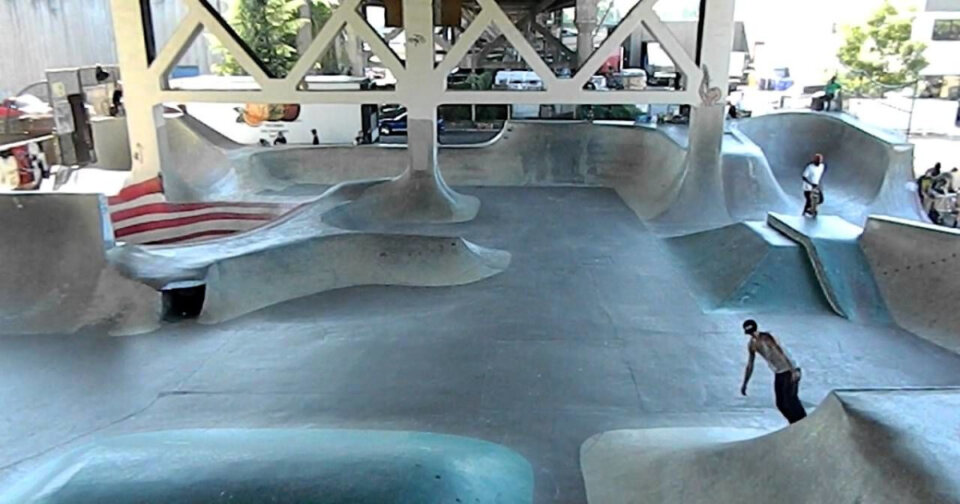