“He didn’t buy it, but he owns it.” —Frank Gerwer regarding “Cardiel’s Rail” and his legendary f/s 50/50. If you’ve never heard the story scroll down to watch the video. Morford 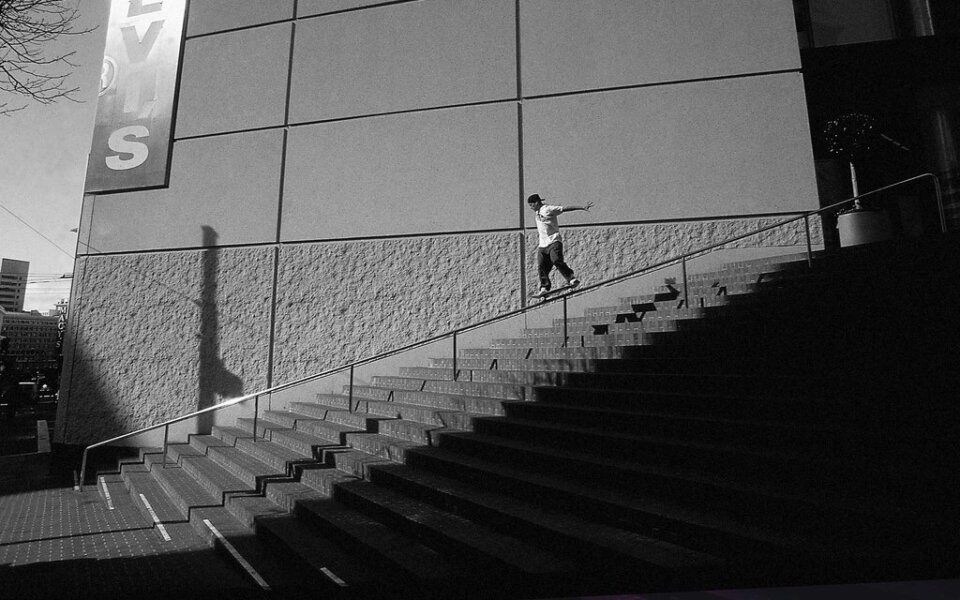 VPS would like to wish a happy birthday to one of the greatest skaters of all time, John Cardiel. John has been an outspoken supporter of the Vans Park Series over the years so we asked fellow birthday boy, Dave Carnie, to chat him up and get his take on some of the possible changes coming to the Series next year.

Two legends, one microphone, so fired up you can taste the stoke. Cardiel plants the seed for some DIY add-ons to VPS. Check it out with your earballs.

I celebrate Cardiel’s birthday every year without fail because, as I learned under rather peculiar circumstances, we share the same birthdate: December 14.

We were on a Vans/Big Brother tour of New Zealand (circa 1999) when we parked our RVs on the beach in Whakatane. Feeling a little under the weather, I turned in early for the night and crawled into the bunk over the RV cab where I slept every night—a location that Julien Stranger termed “the hippie bunk” because when he opened the door to the poorly ventilated vehicle each morning he would nearly be struck down by the fetid odors my feet and ass had silently emitted throughout the night. The stench reminded him of an un-bathed love child. 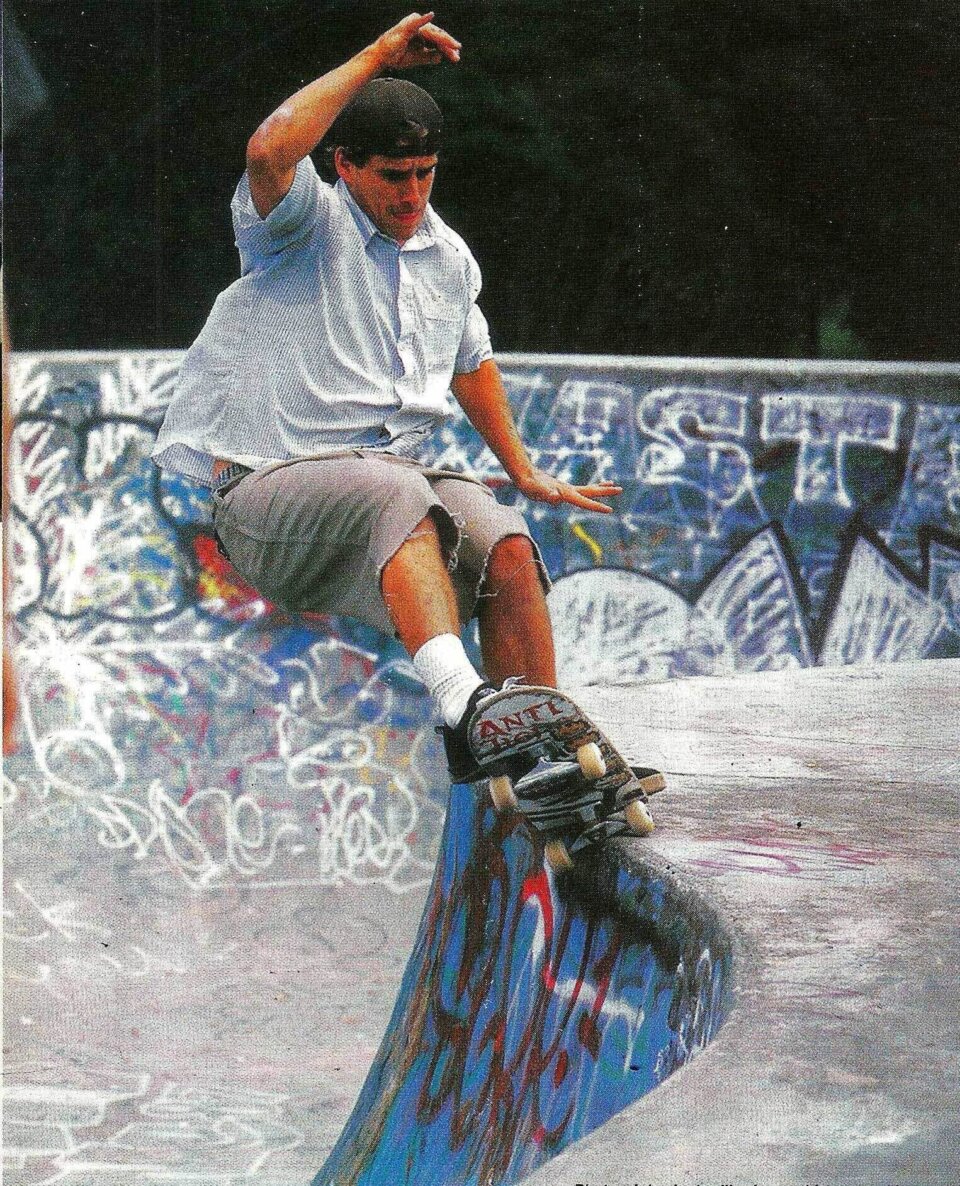 This f/s grind at the Lynnfield park in New Zealand began on the other side of that hip. Since it’s John Cardiel, you can be sure it was traveling around 100 mph—or, as one would say in New Zealand, 160.934 km/h.

When I awoke in my hippie bunk the next morning, however, I discovered that I was not alone. There was a human foot in my face. On the ankle was a tattoo that read, “12-14-73.”

“Curious,” I thought groggily to myself. “Why is my fourth birthday tattooed on this ankle?”

The ankle, of course, belonged to John Cardiel and that’s how we discovered we share the same birthday. Neither of us, however, know what happened that night. We don’t think there was any hanky panky since we awoke with our clothes on and facing opposite directions like two dead sailors, but someone did record a snippet of a conversation we had in our sleep in the hippie bunk:

“You have to check this out,” John was overheard sleepily slurring.

“Well, it’s nothing to tickle my feet over,” I gurgled back.

“No, no, no, you gotta see this, it’s SIIIIIIIIICK!” Classic Cardiel. 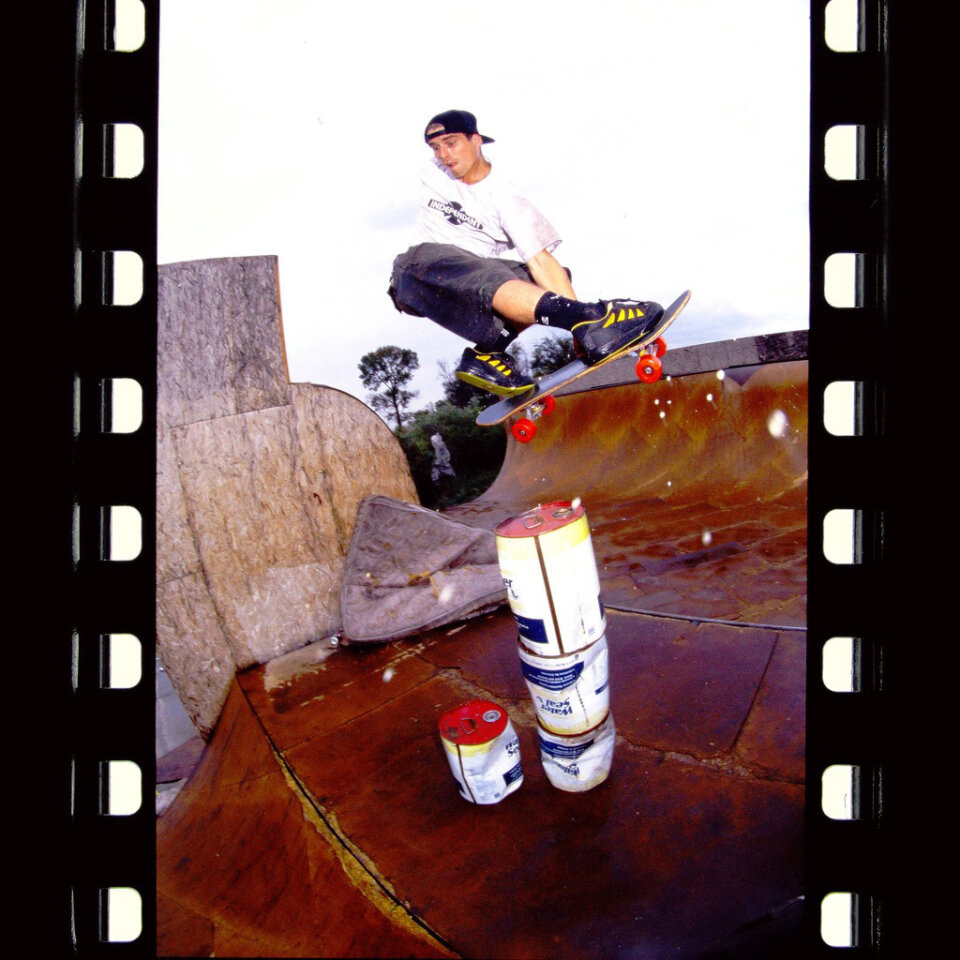 Even if I lie on my back with a board on my feet, I cannot make my body tweak like that, let alone in the middle of a f/s nosebone transfer over four cans of water sealer (irony?) stacked high on a weird gap in the middle of a wet vert ramp. Morford

So when I called John to talk to him for this story, I began by saying, “Happy birthday,” to which he replied, “Same to you!”

“Oh you remember?” I was so surprised and excited that John Cardiel, one of my favorite skaters, remembers my birthday.

“Of course I remember, dude,” he said. “I remember waking up, seeing your leg in my face with your toe cheese dripping on me.”

Apparently I had really bad feet on this tour? Sorry guys.

As I told John what I was doing for VPS, using my previous post, “Happy Birthday, Burnside,” as an example, it occurred to me this would be my second happy birthday post in a row. What am I doing for VPS? I wondered. Am I skateboarding’s Mr. Happy Birthday guy now?

John Cardiel's gold rail is now his for good.

“I’m curious,” I suddenly said to John, as if I were still writing the previous story, “when did you first skate Burnside?”

“I think we were going to Mount Hood for a snowboard trip in the Summer,” John said trying to remember, “and we heard about this little skate thing going down at Burnside, and it was just like this old, gnarly, crusty bowl and basically banks against a wall. I want to say it was probably 1990?”

“Oh wow, so right at the beginning,” I said. “What did you think when you first saw it? Because we had never seen anything like that before at the time.”

“It was really kind of janky,” John said. “The trannies were real gnarly. Like, it was tranny at the bottom, but then it went straight up to a wall of cinderblocks. It was really tight, the coping stuck out super far—it was a gnarly little creature. And then, dude, so Hubbard and Red pull up on a motorcycle and start doing tow-ins to do wall rides on the bank. I was just like, what the—? Hubbard was driving mostly and Red was wall riding so far trying to carve from one bank to the other. It was crazy, bro.”

John has dozens of stories from Burnside—even authored a few himself—but instead I asked him a more general question about Burnside: “What made that janky little project so important to skateboarding’s history? What does it mean to skateparks and skateboarding now?”

“I think it has a lot to do with people listening to what skateboarders want,” John said thoughtfully, “instead of letting parks-and-recreation people plop down an unskateable park in their town and being like, ‘So now you have a place to skate and you're going to get busted for skating any of our city spots.’ The only reason they made skateparks back then was to keep kids from skating the streets, right? So, as you know, Mark and Red became more public and they pulled that energy from Burnside and gave skateparks a consciousness. Burnside was the catalyst for actually listening to what skaters wanted and, you know, giving them a chance to help build, to have jobs, and do their thing, you know?” 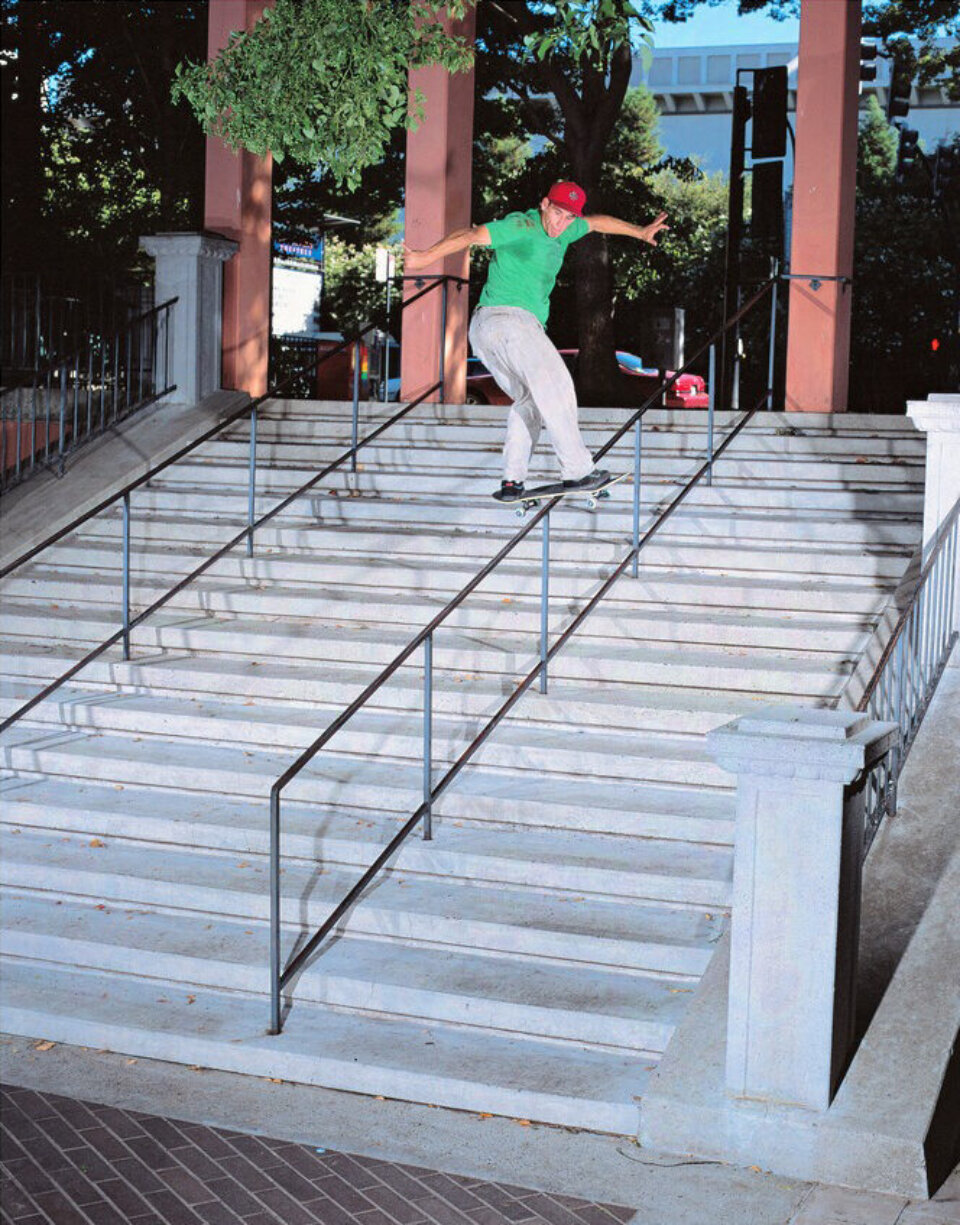 We got all these skateparks because of guys like John doing f/s boardslides in the streets and ruining everything for everybody. Can we get an intern or something to count those steps, please? Thanks. Morford

I love that the “gnarly little creature” gave skateparks a consciousness—I’ve never heard anyone describe it like that, but he’s right: Dreamland, Grindline, and all the other skater-owned construction companies imbue their creations with a consciousness. Their parks flow and are alive. You can feel it when you skate one of them. The composition has purpose. There is a reason everything is where it is. It’s almost as if the park has a Mind and your role as skater in that environment is to try and tap into that Mind, to become one with the Mind of the park.

I suppose that’s what surfers experience—the ocean is a living being, be one with the wave, maaaan—but who can say that cement isn’t as alive as the ocean? Cement is composed of earth and water. The waves it forms are just moving a little slower. 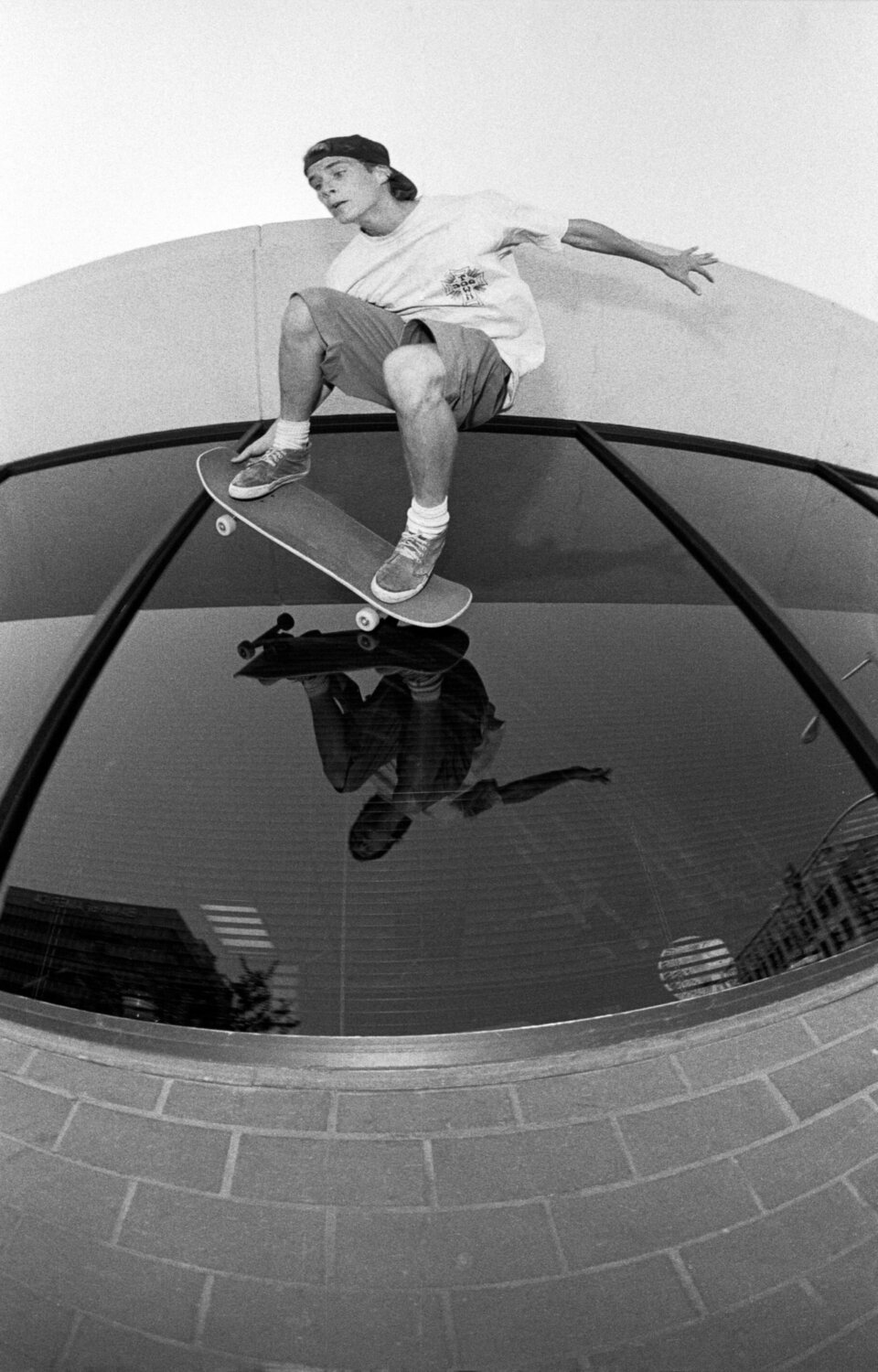 John’s answer surprised me in another way, though, because he touched on exactly why I was calling. Vans is taking that same philosophy to the 2020 Park Series: they’re not only listening to what the skaters want, they’re handing them the keys and letting them drive the bus. Next year’s party, for instance, will see VPS working with, not only the competitors, but also locals on the ground at the Vans Legacy Park sites in Montreal, Paris, and Salt Lake City to introduce a number of fun, unique, DIY-inspired elements to each park.

“I think it's amazing that Vans leaves any type of skatepark at a spot,” John said after I asked him what he thought about the VPS parks, “but as far as going one step further and listening to skaters and actually catering to what the skaters in that area want is above and beyond what you could ask for from a skateboard shoe company that’s having a contest in your town.”

“So with this DIY obstacle stuff they’re adding to the mix next year,” I said, “do you have any suggestions for obstacles or anything that might make it more interesting?”

“I like when people can use those big, bright, plastic barriers because they can move them around,” John said getting excited. “You can have, like, a floating obstacle—like, there are some old photos from Benicia of Julien [Stranger] doing a f/s noseslide on one of those plastic barriers. So it's not just a tombstone at this one spot. You can be like, well, I want to drag this thing over here and connect, you know, a pyramid hit to a bowl, you know what I'm saying? Like, for instance, in Utah there was that Vans logo that Pedro nose grinded—imagine that thing being movable and you can take it and put it wherever you want? In my eye, that's real DIY.” 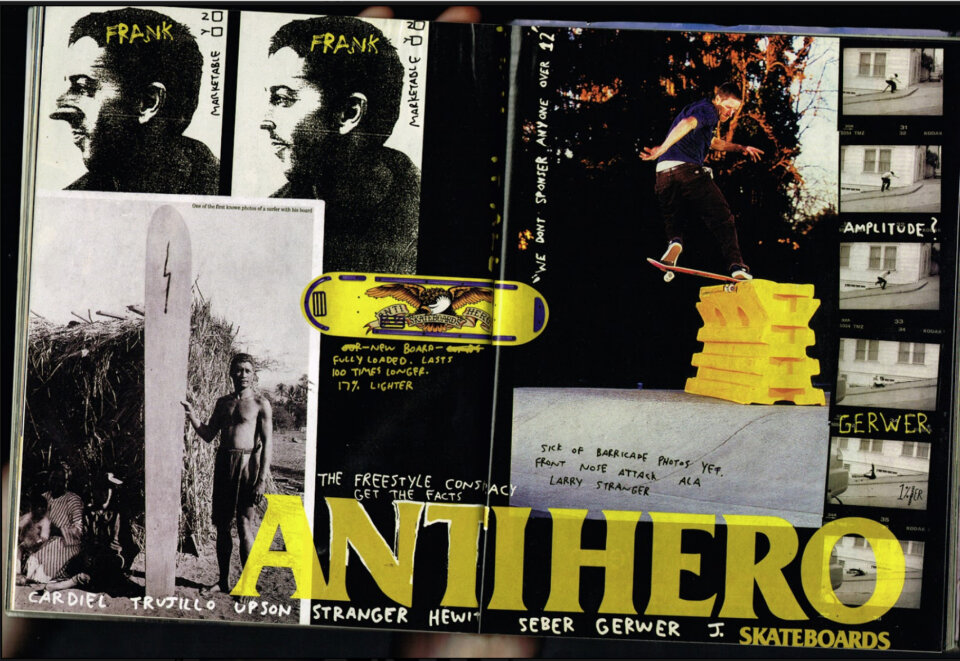 Julien Stranger’s appearance as “Larry” in late 2002 film, The F/S Noseslide On The Big, Bright, Benicia Barrier, was widely seen at the time as “tawdry,” “vulgar,” and “a gimcrack performance by a ham-fisted twit,” yet today it’s regarded as a hallmark of early “Barrier Boyz” style.

“Can you imagine the chaos of a jam session where the riders are stealing the obstacles from each other?” I said

“Rad!” John said laughing. “Like, ‘No, I want it over here!’ It’ll fuck with their minds, you know what I mean? As skaters, we’re animals, dude. We’re fighting against the other people. It's war out there. So let that be a weapon.” 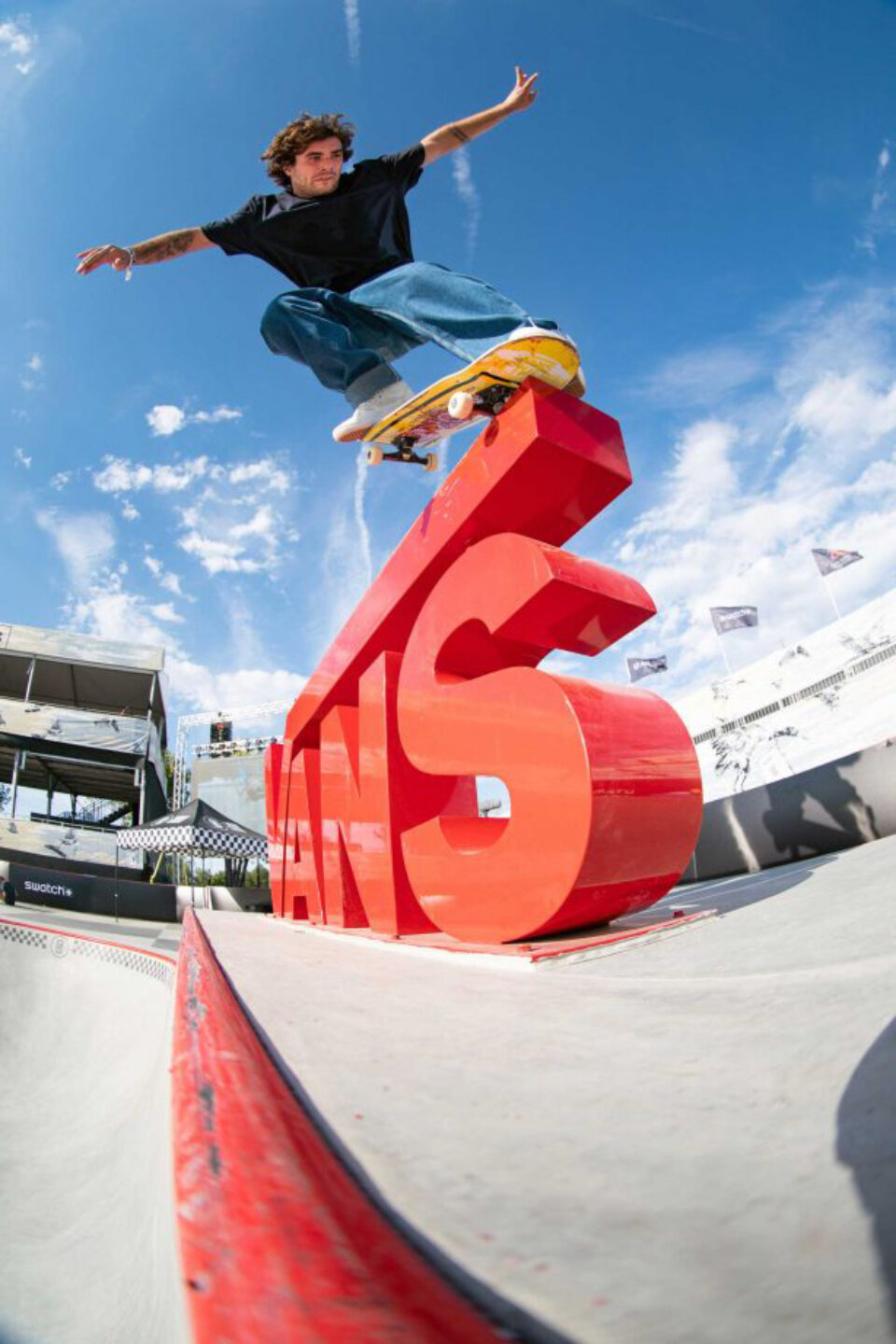 My suggestion for 2020 is that Vans fabricates objects that also act as captions. For instance, if this “Vans” obstacle said something like, “Pedro Barros nosegrind,” then I wouldn’t be sitting here at three in the morning trying to come up with something clever to write. Anthony Acosta

With skateboarding’s competitive circus scene drifting more and more in the direction of compulsory sports like gymnastics, Vans wants to take things in the opposite direction. And the riders agree. So there have been discussions about ways to loosen the format in an effort to make the contests less like contests and more like skateboarding. I already know what format John is pushing for: no format.

“John, I’m sorry I have to ask this,” I began, “but do you think switching to a jam format next year is a good idea?”

“One. Hundred. Percent,” he replied. “One hundred percent. You know, it makes for a more respectable first place.”

“Oh you think the jam format actually makes it easier to determine who the winner is?”

“I feel like it does,” he said. “Because, I mean, you can practice your line all day and complete your run and get first place Andy MacDonald-style, but when you see a guy just going blitzkrieg and when he makes something you're just like, dude, uh-huh: this guy.”

To see a fine example of the wild gnar that a jam session can deliver, check out the 2013 Van Doren Invitational.

Maybe that will be your birthday present next year, John, a VPS jam sandwich? In the meantime, you’ll just have to accept this humble tribute from everyone at Vans and our best wishes: happy birthday, John Cardiel.