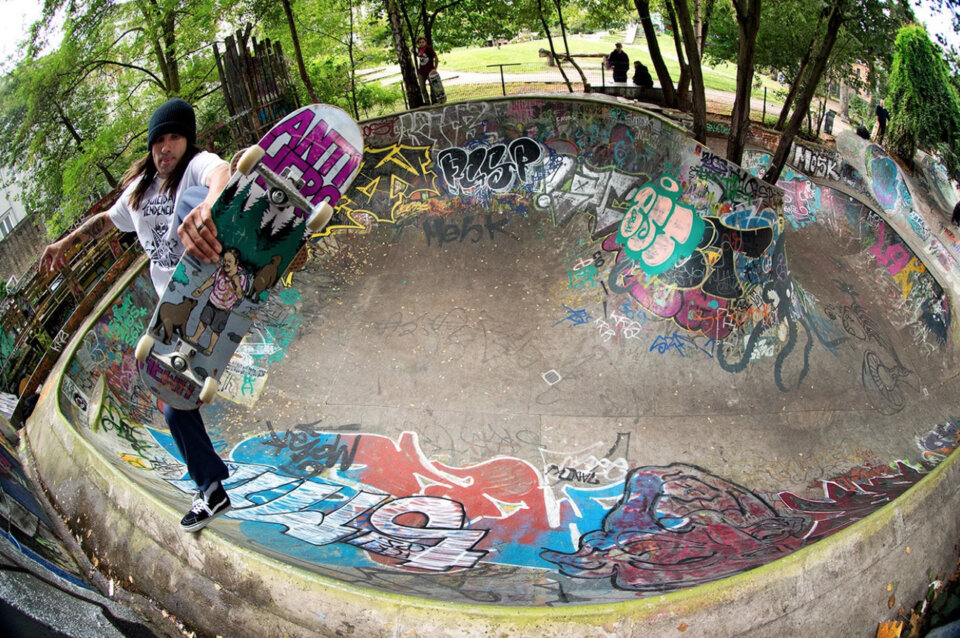 The Vans Park Series is a synthesis of the history of skateboarding that preceded it. If you take a bird’s eye view of skateboarding’s past, as we will in a moment, you’ll see that all our current favorite VPS riders—Ishod, Grant Taylor, Pedro Barros, Greyson Fletcher, Curran Caples, Oski, Sandoval, Wooten, etc.—they are an amalgamation of everything that came before them. Specifically they are the descendants of a “style” that began back in the 90s that was called ATV (All Terrain Vehicle). I thought it would be interesting to take a look back at how this style of skating emerged and pay tribute to some of the pioneers of the “all style” and its influence on today’s rippers.

While the date of skateboarding’s birth continues to recede into the distant past, we can almost certainly say that skateboarding’s modern era began in the mid 70s. This is when urethane wheels were introduced (1972), Bennett trucks hit the market (1973), and the first skatepark opened (Skateboard City, March, 1976, Port Orange, Florida). Not to mention there was a massive drought in California in 1976 that resulted in the emptying of all the pools in the state. The 70s is when modern skateboarding was born and from then til now our history can be divided up into three distinct eras that neatly coincide with a Hegelian dialectic (oh! smarty pants stuff!):

If we plug skateboarding into the equation we get:

I call street skating the antithesis of transition skating because at that time they were very much opposites in spirit. Before 1990, skateboarding wasn’t so much about what you did, but what you looked like on your board. It was about style and that’s why someone like Christian Hosoi could win contests doing b/s airs and little else. When street skating took over, however, that philosophy was completely reversed: skateboarding became extremely technical and it didn’t matter how goofy it looked just as long as your feet landed somewhere on the board it was a make.

The ensuing popularity of street skating for the next two decades completely eclipsed all other forms and styles of skateboarding. Magazines rarely ran photos of transition skating and any vert skating in a video was pejoratively nicknamed, “The Fast Forward Button.” A 1992 Thrasher cover read: “Who Killed Vert?” Because, for all intents and purposes, vert was dead and the industry’s attention was fully consumed by the loud, brash culture of street skating. (My friend and director, Alex Craig, pointed out that if skateboarding was born in the mid-70s, that would make it about 15 years old in 1990—and like most teenagers, street skating had a big attitude.)

But a curious breed of skater emerged during this period. They were difficult to classify because they weren’t vert skaters, per se, and they weren’t exactly street skaters either. They were drawn to transition and excelled at it, but since they had grown up in an era dominated by street, they weren’t immune to its technical influences. They skated everything. And as such, they earned the unfortunate moniker, ATV skaters. (NOTE: no one likes the ATV term, but it stuck and so that’s what they’re called).

Those early ATV skaters are, to me, emblematic of the current landscape in skateboarding—a synthesis of street and vert—and so I thought it would behoove us to take a look back at some of the forefathers that influenced the current breed of park skaters and VPS competitors mentioned at the outset.

This list of 90s ATV skaters is intentionally short, incomplete, and in no particular order—these are just some of our favorite tranny skaters from the 90s. It’s more of a tribute because a lot of these guys were flying under the radar back then and didn’t get the recognition they deserved—I’m not kidding when I say it was nearly a media blackout when it came to transition and park skating during the 90s. But I don’t think anyone will disagree with who I’m starting the list with: John Cardiel. 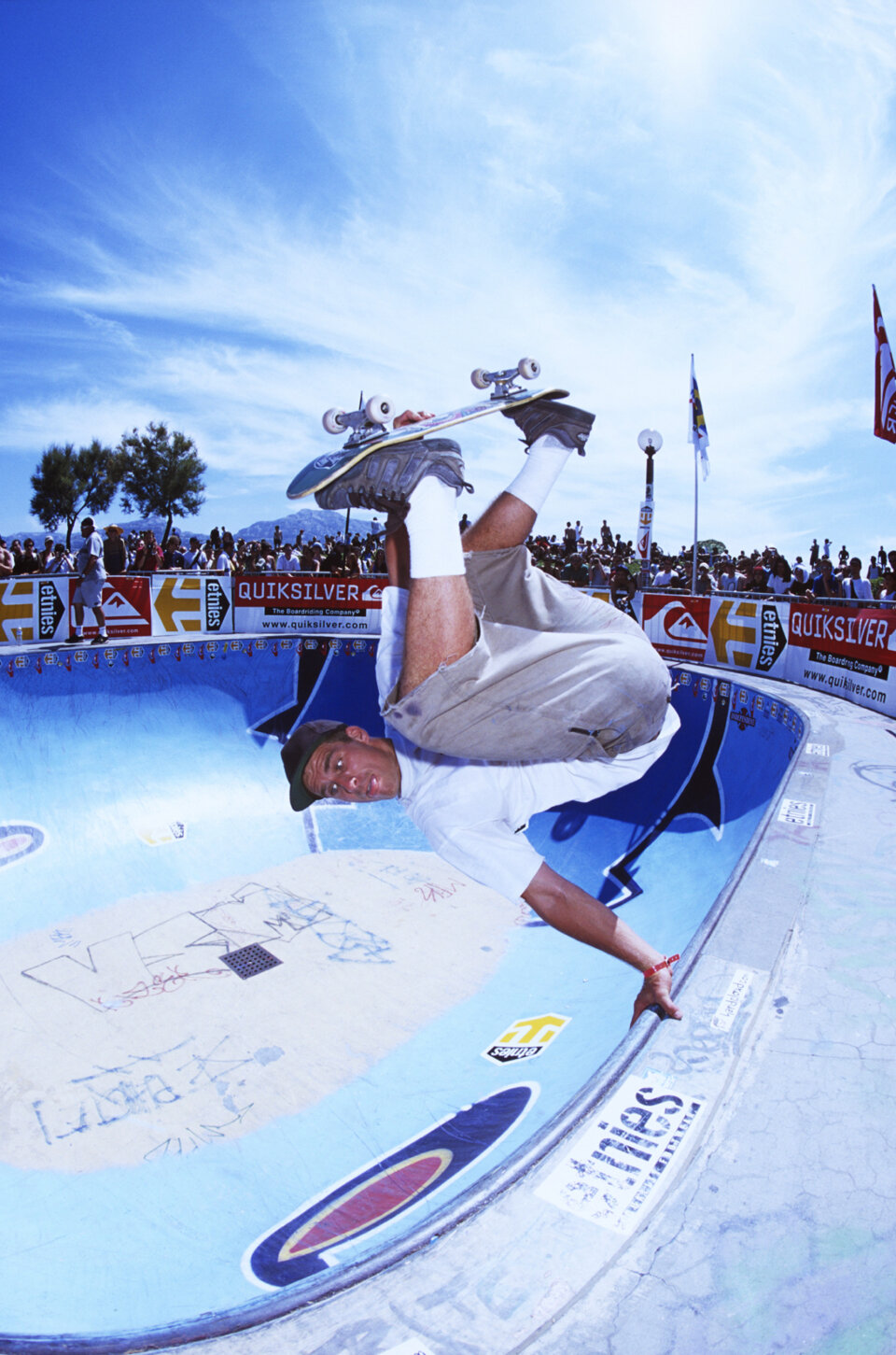 Cardiel might be one of the best, if not THE best, example of an ATV skater. John brought speed, power, and chaos to everything he skated whether it was a park, a ramp, a curb, stairs, hand railing, whatever—one of the hallmarks of the ATV skater was that they looked comfortable no matter what they were skating. If you put a street skater on a vert ramp, you can tell just by the way that he drops in that he’s in unfamiliar territory, and, vice versa, watch most any vert skater try to ollie in the street and it’ll make you barf. But Cardiel brought the same crazy, out-of-control style to everything he skated.

“Have you ever been called an ATV skater?” I asked John rather sheepishly because I hate saying ATV.

“Yeah, dude: All Three Wheels!” John said laughing and making fun of the stupid acronym all at once.

When I asked him to describe an ATV skater, he said, “The people that are known to skate everything, or whatever, I feel like that's just for the love of skating—as a skateboarder that's what you do, right, you just skate? Like, I felt learning how to do a f/s side flip, or a switch f/s flip, like that took me so long to practice over and over again and it annoyed me. I felt like practicing certain tricks stalled me out, but that was my own personal handicap. I was like, I'd rather just get this slappy in—it feels good and it's like, dude, we’re just skating down the street. I like to keep it moving.”

I don’t want to call Tony, “Cardiel’s protégé,” but it’s not entirely inaccurate. Tony has the speed and power of Cardiel, but he has a slightly more refined style with some added tech skill. But, really, that can be said of anyone who rode for Antihero because they pretty much wrote the book on “How To Skate Everything.” Basically anyone who has ever ridden for Antihero, including founder/CEO/President/Grand Poobah, Julien Stranger, should be on this list: Peter Hewitt, Andy Roy, Tim Upson, Sean Young, Brian Seber—in short, you don’t ride for Antihero unless you skate like Antihero. 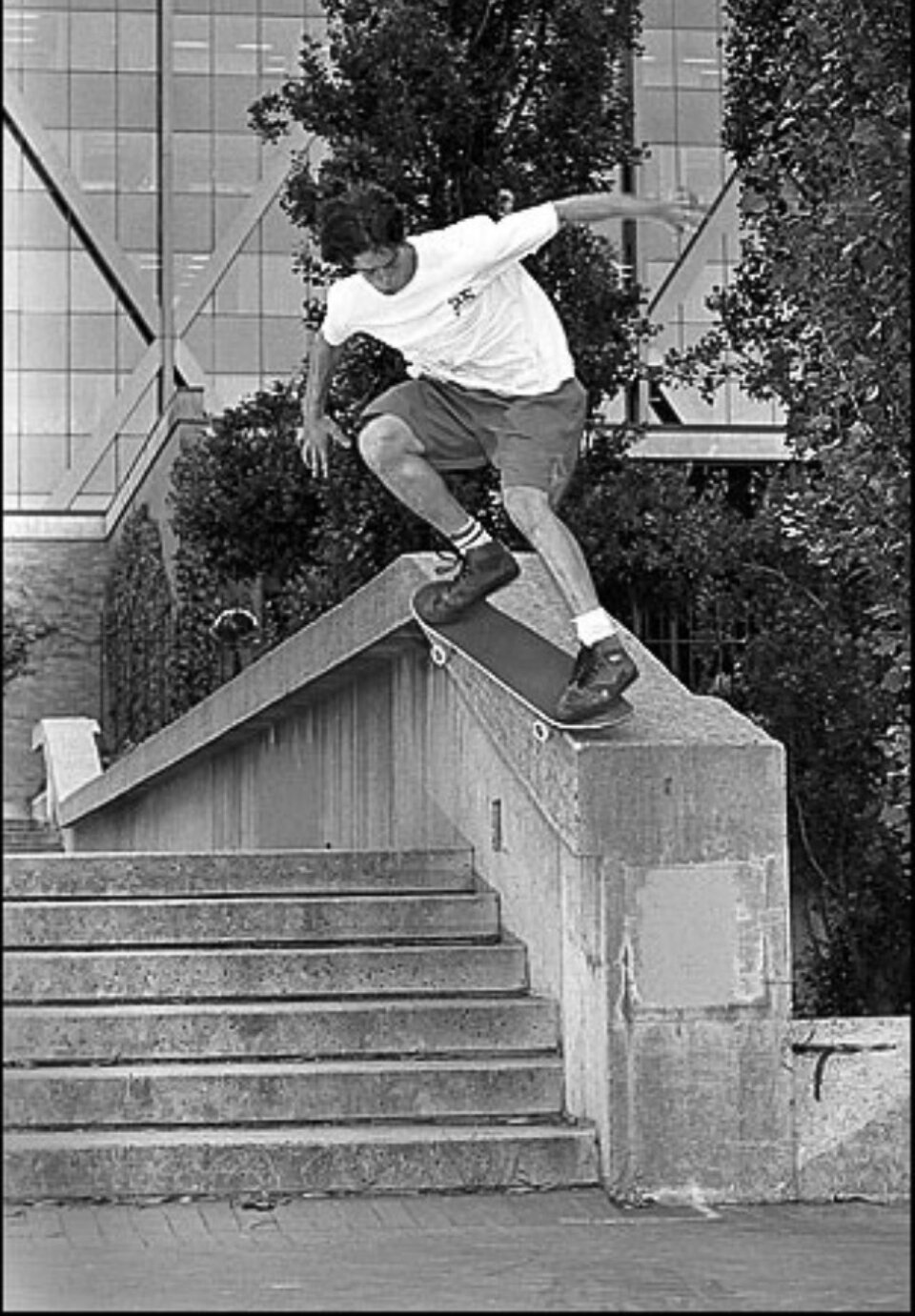 A young Wade Speyer bangs out a crooked grind at the infamous Hubba Hideout. Bryce Kanights

A division in skating arose during the 90s that was best encapsulated in the phrase “Fresh Vs. Hesh,” and no one embodied the hesh better than Wade Speyer. Not only did Wade dress like a trucker, he actually was, and still is, a professional trucker. And, if it’s possible to have a blue-collar skate style, Wade had a blue collar skate style.

Whenever Chris showed up at a spot the best thing you could do was sit down and watch because he would show you where the lines were. He could pump the hell out of a park to get enough speed to make transfers over gaps that before his arrival had no connection. Even by skateboarding’s standards, Chris saw the world from a different perspective. 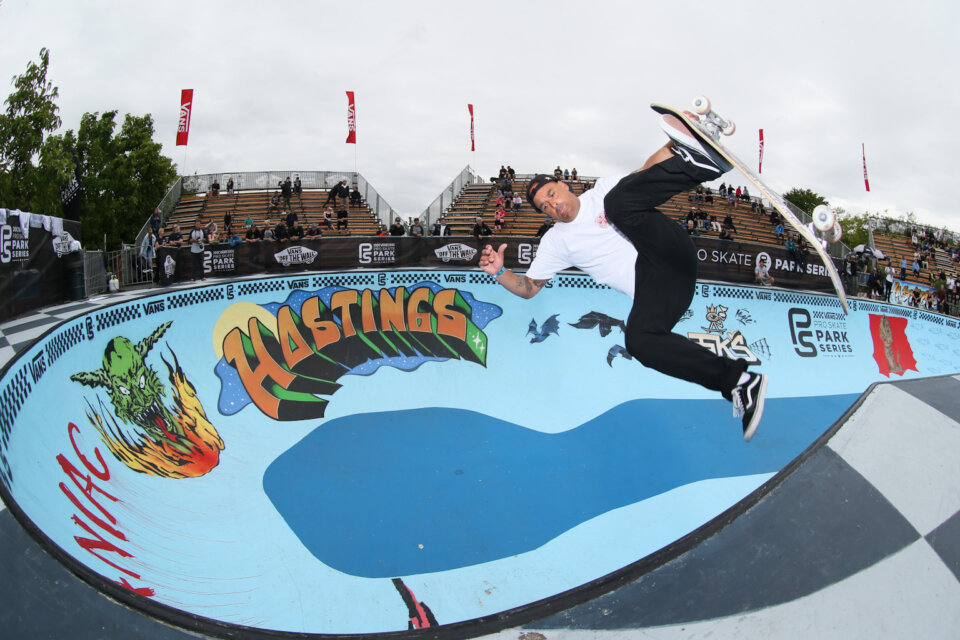 Omar Hassan drifts a fastplant to fakie at the Hastings bowl in Vancouver. Anthony Acosta

When I say a lot of these ATV skaters didn’t get the recognition they deserved, the one I think of in particular is Omar Hassan. Omar is probably one of the most underrated skateboarders of all time, but, unfortunately, he was in his prime killing parks and transitions during a time when the industry was gaga for nothing but street, street, street. Omar has been killing it softly for decades and to this day he looks in control and in charge on whatever he skates. What would you expect from someone who grew up skating with Hosoi?

Alan was another one of those guys that could skate vert, street, and everything in between, but didn’t get much coverage. In the pre-Jimmy Wilkins era, Alan had one of the best floating f/s ollies around. Not sure if this is true, but last I heard Alan had settled down in Australia and worked as a mailman.

(Other Consolidated teammates of Alan’s worthy of an honorable mention on this list would be Karma Tsocheff and Steve Bailey.)

I lived with Ethan for a couple years in San Francisco and so I can say with authority that he is one of the most naturally gifted skateboarders I’ve ever seen. The dude skated everything because he was good at everything he did. I remember when he bought his first guitar and within a few days he sounded like he had been playing for years. I came home from work one day later that week and he had learned an entire Slayer song (I think it was “213” off Divine Intervention?) from start to finish. Everything he did came easy to him and there wasn’t a single trick in his repertoire that didn’t look cool—all finesse—not the least of which was his ollie: a thing of beauty.

Not only was Alex a tranny skater, but he was a Canadian tranny skater, and that meant he had two strikes against him in the eyes of the American street skating media. If I were to describe Alex’s style of skating in hockey terms, he’d be what is called a “power forward”: he can score goals with his nimble footwork and quick hands, but he’s also big enough to knock you on your ass.

When I asked Cardiel about who he thought were notable ATV skaters from the 90s, he mentioned Phil Shao in almost the same breath as Mark Gonzales (Mark is not on this list because he’s a list all to himself). John was super impressed that Phil, much like Mark, actually entered vert contests.

“I mean they entered vert contests,” John said about the two. “That's amazing. Like you’re a street skater and you enter a vert contest? Like that's so versatile, man, I dig that.”

It’s debatable whether ole “Beans” was the most beautiful man in San Jose’s Beautiful Men’s Club (BMC)—he was extremely handsome, but there was a lot of competition in that category—he was, however, easily the most talented and most versatile skater in the gang. Unfortunately Tim died less than a year after Shao did. Single finger salute to one of the best. RIP.

At the beginning of this article I described ATV skaters as “flying under the radar,” but one dude who has never flown under any radar—or under anything for that matter—is Danny Way. Because Danny’s achievements on vert have been so prominent and groundbreaking, he doesn’t often get credit for his ability to ride a skateboard on anything. Danny, incidentally, was the first person Cardiel mentioned when I asked him about ATV skaters.

“I felt like Danny Way made an effort to connect the dots on all levels,” Cardiel said.

Nowhere is that more apparent than his performances on the mega ramp: have you ever seen any trick that encompasses nearly every facet of skateboarding better than his kickflip over the gap to f/s lipslide across that rainbow rail at 100 mph? He synthesized every aspect of skateboarding and created something entirely new out of it. Danny Way is sort of like the Gonz in that he is his own list, but if we’re talking about ATV skaters in the 90s, Danny needs to be near the top of the list—even though he’s down here at the very bottom of the list. Saved the best for last?